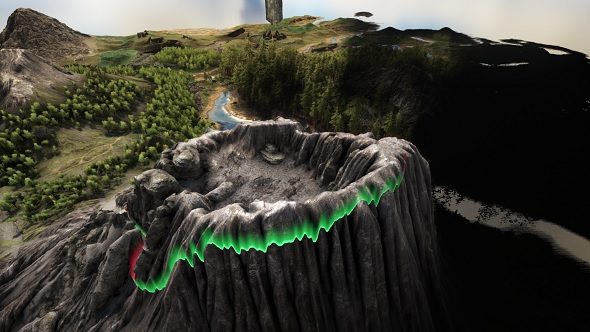 I hope you aren’t too attached to your volcano base. With patch v257 for Ark: Survival Evolved awakening the island’s long dormant volcano, developer Studio Wildcard have delayed the release of the patch so players can avoid their bases being consumed by molten lava.

For all you true survivors, check out our list of the PC’s best survival games.

Announced via the Ark: Survival Evolved forums, Studio Wildcard have released an image showing the area which will be affected by their “active remodeling” of the volcano. Anything within the green border will be hidden under several feet of lava, so it is advised you move anything well out of range. A client-side patch has also been released, showing the border in-game and providing a giant green reminder for everyone to quicklymove outof the volcano crater.

When the patch does arrive on May 3, it will include more creatures, some extra Tek Tier items, UI tweaks and some extra music tracks which can be previewed in the volcano warning post. One of the items coming in this patch is a saddle for the Megalodon, so players can finally live out their dreams of being prehistoric Aquaman.

As for the volcano itself, it will eventually form part of the game’s Ascension end-game content, where it will host “an uber-hard dungeon and a stargate” according to a community Q&A over on Steam. Beating this dungeon will eventually lead to the titular Ark, where players can sacrifice their current character and then resurrect as a new one, along with a “soul cube with a progressive level cap”.