For the full skinny, have a read of our Ark: Survival Evolved guide.

ARK: Survival Evolved has increased its price on Steam to ensure retail parity for the upcoming launch. https://t.co/hx1Fad9F5C pic.twitter.com/joAoZNxI41

This decision sparked anger in the community, with some, like DayZ creator Dean Hall, calling the move greedy:

Just so we’re clear on my opinion: the price increase for Ark is ****ing OUTRAGEOUS.

Ark: The game is nowhere near ready for that kind of price. It’s greed – pure and simple. It represents a huge disconnect with the community

Speaking to us earlier this week, Jeremy Stieglitz, Studio Wildcard’s co-founder and design director on Ark: Survival Evolved, explained in greater detail why the price hike had happened and what he thought about Dean Hall’s statement.

“I don’t know if we really communicated to the player base exactly why it happened,” Stieglitz says. “We’re honestly sometimes not as focused on communication as we should be.” He points out that the community team also manage QA and balancing the game on top of managing its fans – “So they’re pretty overwhelmed!”

Stieglitz says that the price increase came from a demand from the retailers who were going to stock Ark in the shops. “They wouldn’t accept the digital version being cheaper than the retail version,” Stieglitz explains. “We always intended the game to be $60. What would have been ideal would have been raising the price at the exact point of transition from Early Access to retail but for the pre-orders it was necessary – they wouldn’t be able to run a pre-order programme if there was a much cheaper digital version of the game available.”

Even though the game has seen incredible success as a digital title, Stieglitz emphasised how important a retail release was to him. For one, he says, “a lot of players today still don’t download games digitally.” The other reason is pride: “I want to see that game on store shelves.” 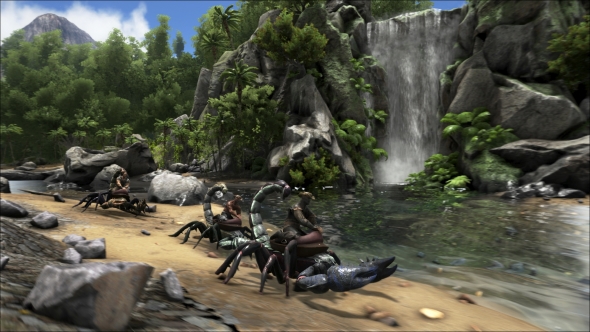 As to Dean Hall saying the decision was “ greed – pure and simple,” Stieglitz says “That’s pretty rich coming from Dean Hall. Maybe he should decide to voice his opinion when he finishes his own game.”

And, to the non-Dean Hall Ark players, Stieglitz says, “I can only say first off, I think when the game is finished it’s a $60 game. It has huge amounts of content in it, both for a single-player and a multiplayer gamer. I think the scope of the game really speaks for itself. You have a really truly viable single-player mode, a tremendously scaled multiplayer mode that has all kinds of variants to it – PvE, PvP, there’s local multiplayer, there’s also the large-scale persistent servers, there’s tonnes of variety of them – there’s an official total conversion that we’ve included in the game for primitive style gameplay, there’s multiple maps as well as procedurally generated maps, and over 600 items you can learn and get in the game and over 100 dinosaurs.

“We have over three times the amount of content in the game now than we did at launch in Early Access. Does that equate to $60? I will say that I’ve seen a hell of a lot of games for $60 that have a hell of a lot less content and fun factor. I would only say that I’m glad everyone bought in at $30. We wouldn’t be here if it wasn’t for them and we’ll continue to work hard, both in terms of what has been done in the past and what will be done in the future, to justify $60.

“I can’t imagine anyone saying it doesn’t have sufficient content to merit $60. Personally, I think it’s worth $60 as we head into launch. I hope players do too.”

After a beat, Stieglitz adds: “I’m sure looking forward to Dean Hall’s next game.”