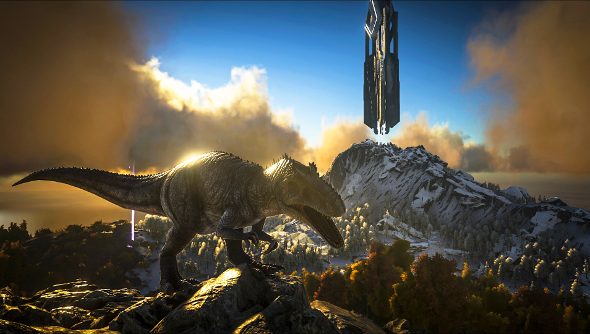 Ark: Survival Evolved is host to a few big dinosaurs that would sooner munch on your bones than look at you, but they look properly pitiful when compared to the newest dino: Giganotosaurus.

If you’re looking for mods, take a look at our list of the best Ark: Survival Evolved mods.

The Giganotosaurus genus includes beasties that were only slightly bigger than the biggest T.rex, but Studio Wildcard’s decided to put their ones on a fitness regimen that includes lots and lots of steroid injections, because they’re absolutely massive.

“While greater in size than most large predators,” explains the dinosaur spotlight, “the Giganotosaurus is sometimes less dangerous when encountered in the wild, due to its sluggish speed. Even still, getting trapped or chased down by a Giganotosaurus often means certain death for nearly any creature.”

Fighting one of these titans is not advised, because – much like a certain scientist – hitting it only makes it stronger and angrier. They are not indestructible, however, and especially brave (and insane) players might be able to tame one of them. Even a tamed one is dangerous, though. If they get riled up, it might attack members of its own tribe and throw its rider off its back.

A bit of a risky pet, then.

Reactions on Steam so far have criticised it for being too big, too ‘OP’ and not realistic. Presumably these are the people who would prefer Jurassic Park’s Velociraptors to look like reptilian turkeys.

Actually, that sounds terrifying. Maybe they’re onto something.