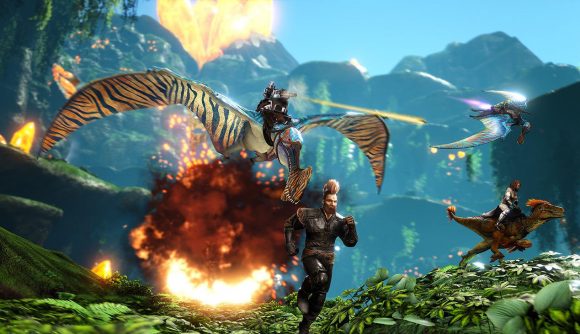 Ark: Survival Evolved is now five years old, and as it happens it’s also this week’s free offering from the Epic Games Store. It’s really no coincidence at all: Ark is kicking off a big fifth birthday bash, and going free this week on Epic is just the start of things.

If you’re just tuning in, Ark is a massive survival sandbox MMO heavily focused on crafting, but don’t let that distract you from the massive dinosaurs roaming all over the place. These can be tamed, bred, and ridden into battle, complete with lasers mounted to their heads. Sure, you start off naked and freezing, but the only way to go from there is up – and potentially through the digestive tract of a large, toothed lizard.

Studio Wildcard is adding to the roster of these for the anniversary event. You’ll now be able to meet the Tropeognathus, which looks like a dopey version of the pteranodon. It’s a flying dinosaur with a long snout that bears half moon crests above and below its mouth. I expect it hurts lot when Tropeognathus comes screaming out of the sky to repeatedly hit you with them.

The event also sees the addition of the popular community map ISO Crystal Isles to  Ark as official, supported, and most importantly free DLC. It’s been available as a mod on the Steam Workshop for years, but now it’s part of the game’s official canon. Crystal Isles features floating islands, lava reefs, and spooky forests – and it’s also home to crystal wyverns, which Studio Wildcard says will be appearing in tameable form on the map.

Wildcard also says it’s marking the anniversary with a series of events – something about party hats and a time-honoured tradition that may or may not involve beach streaking. There’s also ‘interactive cakes,’ unicorns, and ‘party dodos.’ In other words, a very normal party that everyone will be able to enjoy.

In its five years, Ark has come a long way. We’ve had quite a bit of fun with it ourselves: you can read about how our man Jack once founded Ark’s least-successful microbrewery, or his Ahab-esque quest to kill the leedsichthys, Ark’s scaly, mysterious leviathan.

It’s on our list of the best survival games on PC, and it’s still massively popular over on Steam, where in March it hit a new peak concurrent player count of 157,400.

Dinosaurs may not be your thing, so it’s worth noting that Epic has another free offer today: a new collection of classic Samurai Shodown games, fittingly titled the Samurai Shodown Neo Geo Collection. You’ll be able to pick that up on Steam starting June 18, but you’ll have to A) wait until then and B) pay full price for it. This week, it’s free to keep on the Epic Games Store. The collection includes the never-released Samurai Shodown V Perfect, which was meant to be the series finale on the Neo Geo.

If you’re one of those fancy people who doesn’t use the Epic Games Store, you’ve still got plenty of options: check out our list of the best free games on Steam.