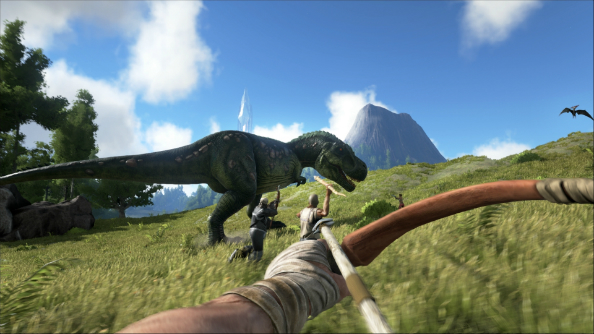 Long answer: when ARK: Survival Evolved launched as a Steam Early Access title on 2 June 2015, it did so with no publisher backing to help the unknown Studio Wildcard publicise their game. Four months later, still operating independently, it’s the fifth most played game on Steam, attracting higher daily player counts than GTA V and Metal Gear Solid V: The Phantom Pain. Prehistoric mounts, as alluring as they are, will only get you so far up that ladder – so I sat down with studio co-founder Jesse Rapczak to discuss the other factors behind ARK’s meteoric rise to prominence.

Want to customise your dino survival experience? Check out our best ARK mods.

“To get the game off the ground,” Rapczak tells me, “it was pretty much self-funded. Private loans, stuff like that.” That’s a huge risk for any game developer, but in ARK’s case it was a risk moderated by a significant amount of triple-A game development expertise gathered at Studio Wildcard’s Seattle headquarters. Rapczak himself is a veteran of Microsoft Game Studios, where he worked on the augmented reality Hololens project, and Sony Online Entertainment.

Working with him are veterans of the Uncharted and Primal Carnage games, across four studios worldwide: Instinct Games, based in Egypt and tasked primarily with engineering work, Efecto Studios in Colombia working on art assets, technical art and level design, Virtual Basement owned by Primal Carnage’s Ashton Anderson, producing the dino models, and Studio Wildcard itself.

“We’re very fortunate because of the amount of expertise that our team had to get a playable version of the game out,” says Rapczak. “It didn’t cost us too much to get to a release, relative to big budget titles.”

“Since then we’ve had to expand and spend more resources, but it’s all good because we have revenue coming in.” A lot of revenue. Rapczak estimates that the seven months of development prior to ARK launching in June cost $1.5 million – by contrast, it generated $10 million in its first week of release as an Early Access title. Four months down the line, that revenue stream has “allowed us to expand in the way we want and stop bootstrapping, and for lack of a better term, working out of our basements.” Ashton Anderson’s Virtual Basement proving the exception to the rule. 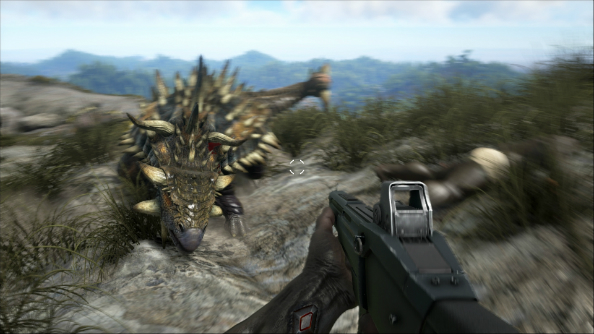 Compelled to pump the brakes on ARK’s incredible success story, I ask Rapczak what his game did differently in the current landscape of ubiquitous Early Access survival games to attract such an audience. Partly, he responds, ARK proves an antidote to the “game design fatigue”currently looming over the industry by giving the player a plethora of play styles and a sense of agency over the game world. “We just keep adding in new types of gameplay elements that some players really like to grab onto.”

“We’ve always said, it’s kind of like an environment where players can come in and not just play the game but also live it. All these things have contributed to its stickiness and its success. And also, just letting people play the game the way they want. Hosting their own servers, giving them all sorts of mod support early on.”

ARK is currently the only UnrealEngine title with official mod support except Epic’s own IPs, and that unique positioning has attracted many semi-pro and professional developers to the game’s modding scene. The results vary hugely in theme and scale – baby dinosaurs, an advanced roofing system, and enormous new maps to explore and cultivate – but the level of quality seldom dips below the hugely accomplished.

With the game still in Early Access phase and several user-created mods having been adopted officially into the base game, the line between development and modding is a blurry one, I suggest to Rapczak. “Yeah, sometimes it feels that way… we had a modder that created angled roofs. We never added angled roofs to the game because we thought it’d be a lot of work and we weren’t sure how much people would use them. But someone went ahead and added them as a mod, and we’re like, ‘Hey, that actually works pretty well! Let’s get that working in the game.’” 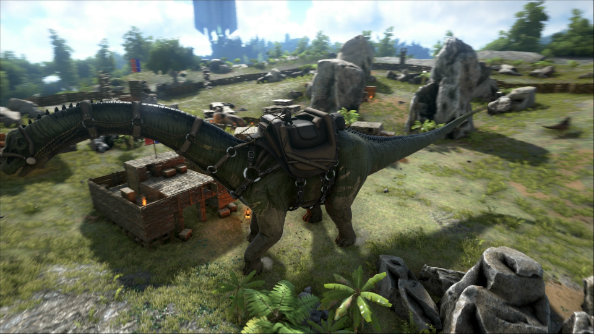 Beyond simply an opportunity to make the game better, ARK is also becoming a portfolio platform for budding devs. UnrealEngine’s widespread use across the industry and limited modding opportunities means Studio Wildcard’s game is a particularly attractive proposition for aspiring game makers. “[They’re] using ARK as a platform to test their gameplay ideas, throw some art in, to be experienced by this vast community of players that we have. That’s why I think we’re seeing such high quality stuff come through.”

It’s a very different style of game development than that adopted by ultra-conservative triple-A studios funded by major publishers, and as Rapczak explains, is demands a different studio philosophy too. Hierarchy is relatively flat, individuals are left to concentrate on their particular areas of expertise, and player feedback is taken very seriously. In short, Studio Wildcard and its subsidiaries have “one goal,” albeit a goal that involves considerable plate-spinning: “integrating our community feedback, integrating our gameplay designs and moving through Early Access very quickly, without ignoring our customer base and all the things you see people misstepping in Early Access.”

“The only way we can really do that is with our team, and the way we have everything distributed across all of our disciplines.” Colombia worries about its share of the plate-spinning, Egypt performs its own balancing act, and the remarkably swift development pace that has thus far characterised ARK continues. 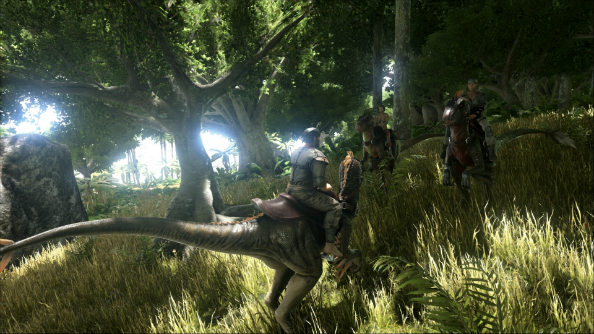 Rapczak is happy to bring up the missteps developers often make in Early Access, of course, because they can’t be squarely aimed at ARK – at least, not yet. Studio Wildcard could never be accused of going dark on its user base, nor letting their game fester as promised updates remain perpetually on the horizon. It’s an especially salient topic given the amount of money Studio Wildcard have made in such a short time, drawing parallels with DayZ standalone, released via Ealy Access in 2013 and still awaiting a final build.

The definitive judgement will come on v1.0 release day in June 2016, but thus far ARK is setting a fine example to other Early Access titles. What are Studio Wildcard doing differently to avoid those pitfalls, I ask?

“The first approach, the most basic approach, is to have a production schedule that we intend to stick to. We’ve always been very open and public about our plans to release the game, and we’re always reminding people of that. Our Early Access period is pretty much going through until the beginning of next year before we lock down with a formal alpha and beta ahead of a summer release. And that’s still our schedule. We view this Early Access time now as the time for iteration and feedback from the community.”

“The second part is that during this time we’re implementing stuff very quickly. Some people don’t like that. One of the things about Early Access is that a game can change a lot over the course of a week. But I think the type of people who buy into Early Access have been pretty satisfied with the way we communicate very consistently, very openly, with the player base.” 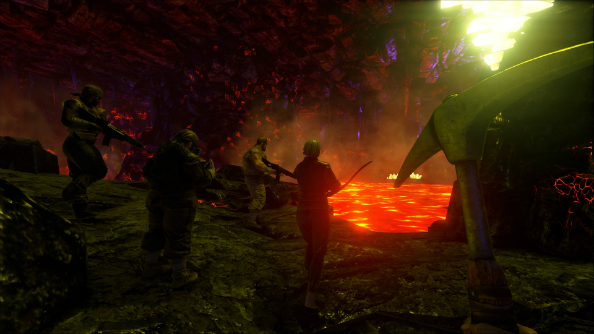 ARK has also been kind to its players by avoiding any wiping of their progress, and stamping down on ESP and speed hacks as they emerge. There will always be voices of dissent in such a large crowd, but Rapczak says the complaints squared at Studio Wildcard tend to run along the lines of “Hey, we haven’t heard from you in eight hours – what’s happening?” Above all, he says, they aim to never use The Early Access Excuse: “’Hey, it’s Early Access, deal with it.’ We’d lose so many players if we did that.”

So, the dinosaurs have undoubtedly helped. Likewise the modding scene, and the proactive approach Studio Wildcard have taken to turning player feedback into game updates with unnerving speed. But as with so many Early Access titles – and, indeed, so many survival games, Twitch and YouTube streamers are also major players in the story of ARK’s success. The list of broadcasters who played the game prior to launch is formidable, and they provided a very effective grass roots PR campaign for Studio Wildcard.

“We definitely leveraged Twitch a lot. It’s important to reach out and get people playing the game… it’s given our game not just street cred, in terms of gameplay, but it’s always kept it somewhat high profile on people’s radars.” Streamers with small audiences prior to ARK’s release have since gained large followings off the back of their dinosaur-hunting broadcasts, he tells me. 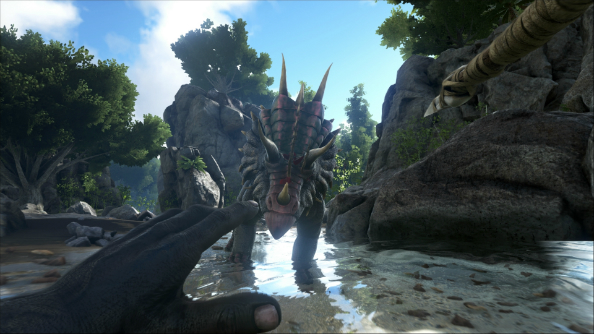 But Studio Wildcard also sees streaming as another testing environment: “We’ve implemented so many things and gotten so much feedback and fixed so many bugs from the streaming community. And it’s not just the streamers, it’s their fans and their viewers who are suggesting things. It’s part of this big vehicle of our Early Access methodology of paying attention to the community. It’s just another channel for that.”

It’s a point that Rapczak labours throughout our chat, but if you’re going to stress any one aspect of Early Access development, it’s going to be that. ARK may have taken a completely different direction, thematically and mechanically, without the input of its 30-60,000 daily players. With them, it’s become, simultaneously, an adventure game, a sandbox, a mod haven, a developer’s portfolio, and perhaps most pertinently, a good news story amidst a slew of games whose wheels fell off the wagon during Early Access.

There’s a growing sense within the ARK community that this is game development done right, and as you look back on ARK’s story thus far you can’t help but wonder if triple-A developers wouldn’t benefit from stealing a few of Studio Wildcard’s practices, emphasising a breadth of ideas and mechanics over launch day polish. That argument, of course, only holds up as long as ARK does one day arrive at the same level of polish as those aforementioned triple-A titles. By final release next June though, ARK will already have well and truly made its impact on the industry.