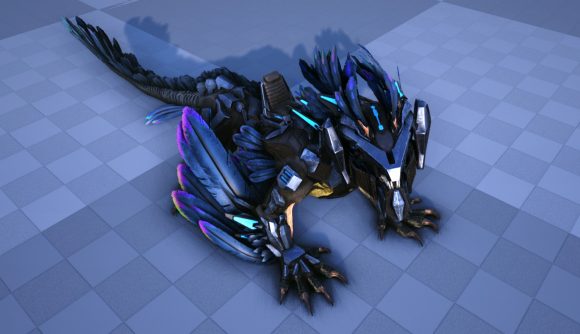 We all know the noble rock drake in Ark: Survival Evolved – it’s that massive camouflaged terror that seemingly appears out of nowhere to jack up your day when you make the mistake of poking around its nesting areas. Once tamed, they’re the scaly Land Rovers of the sky – gracefully gliding through the air and skillfully clambering up sheer rock faces. As a mount, though, they can be a bit unwieldy – so here’s a mod that reduces the size and makes them way more manoeuvrable.

The aptly named Small Drake mod is just like Rock Drake, but 50% smaller. What it loses in size, it gains in swimming speed, climbing speed, gliding speed, and turn radius. Sure, you’re losing some health and damage output, but you’re gaining stamina – and you can still ride these little Fiat 500 Drakes straight up cliffs when the situation calls for it.

A custom saddle (without a passenger seat) becomes available at level 70, and a custom Tek saddle is available at level 85 (also without a passenger seat). Just like the larger versions, you can’t actually tame the Small Drakes – you have to steal an egg, and then feed the baby using venom you’ve obtained from knocking out one of the wild female Small Drakes.

Using the mod, you’ll find that they’re rare spawns on all maps, and you can see a list of spawn locations courtesy of modder Hazender over on the Steam Workshop.

For more of the best survival games on PC, just follow the link.