From the moment you read/watched the opening moments of the The Hunger Games’ arena showdown, you knew that this whole concept would make a superb video game. Child slaughter aside, it’s a thrilling deathmatch between desperate people involving survival skills, sharp objects, and alliances destined to end in blood.

Looking to prove you’ve got the skills to stay alive? Then play one of the best survival games.

So colour me surprised that The Hunger Games finally gets its video game break in a form that doesn’t have Jennifer Lawrence on the box, but instead is a free-to-play spin-off of ARK: Survival Evolved. (OK, this isn’t strictly the first time, but the ever-popular Minecraft mod isn’t a stand-alone game).

ARK: Survival of the Fittest is a multiplayer arena game that so brazenly copies every element of Katniss’s world that it’s pretty much full-on plagiarism, but thankfully provides us with the means to play one of the most exciting fictional battles ourselves. With added dinosaurs!

A fun fight to the death! For 72 players 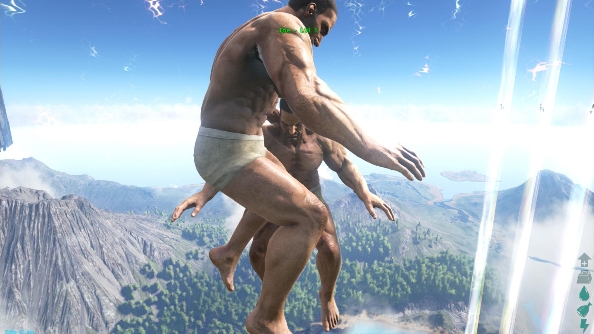 Up to 72 players compete in Survival of the Fittest, with the choice of two different approaches: either in a straight-up free-for-all or in groups. The game supports ‘tribes’ of either two, four, or six players, and you form these in a virtual lobby that hovers a thousand feet above the island arena.

For five minutes, players beg or bully each other into tribes, discuss battle plans, and taunt the competition. The tribeless stay silent and reflect on the slaughter to come. And then, as the countdown concludes, the music swells and players float down to the arena. That moment when Katniss is in the tube? Yup, that’s this.

A cornucopia of goodies to kill for 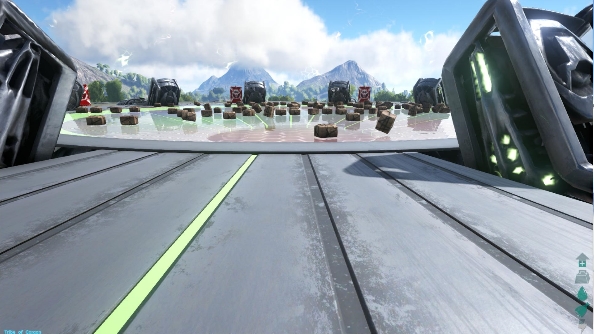 The very first seconds of a match see every player surrounding a circular metal plate that’s covered in random loot bags. It’s the cornucopia from the story, and naturally everyone’s hoping for their bow and arrow. As people meet in the centre, those who have been lucky enough to find a weapon begin the slaughter. Five players can be dead before the first minute is even over, their corpses strewn about the now picked-clean platform. And when you die in Survival of the Fittest that’s it: back to the main menu with you.

The sprint from starting position to loot bags and into the wilderness is exhilarating. It captures the essence of a movie scene better than almost any licensed game ever developed, and it’s only the first few seconds of the entire thing. When you’re safely hidden away among the branches of the surrounding jungle, that’s when the real fight for survival begins. 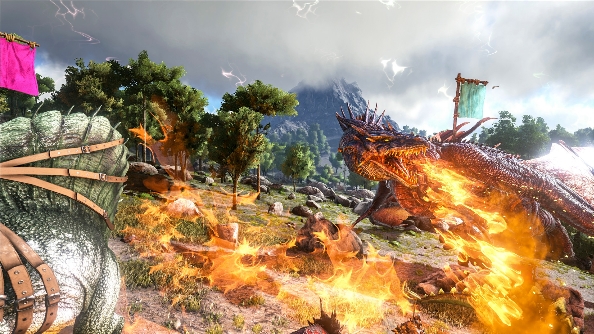 A Hunger Games arena is home to a variety of genetically-modified creatures: mutant dogs, crazed baboons, and hornets with hallucinogenic venom are some potential adversaries for the children of Panem. ARK has dinosaurs instead. When you’ve escaped the initial bloodbath, the game becomes a fast-paced variant of the original survival game, and so dinosaur taming is a significant part of the experience. There are up to 71 other players to kill, so having a velociraptor on your side could be very handy. Taming can now be done in minutes as opposed to the hours required in Survival Evolved, but regardless of the time commitment, convincing a dino to be your bitey butler is still a challenge.

A new horror every hour! 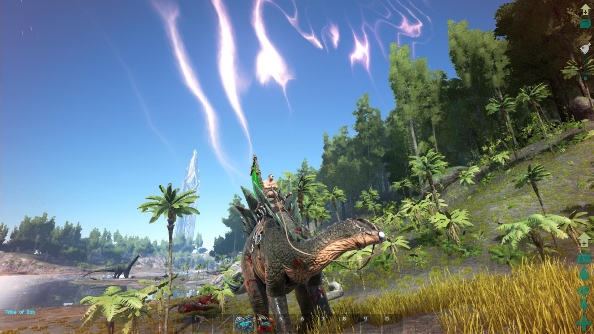 In the second Hunger Games story, Catching Fire, the arena is split into twelve sections like a clock face. Every passing hour triggers an event in one of those sections; such horrors as poisonous mists, blood rain, and flocks of birds mocking the screams of your loved ones. ARK takes this idea and runs a mile with it, having twenty different random Evolution Events. They’re not triggered hourly as in Catching Fire (a match only lasts 90 minutes), but you’ll see more than a few of them each game you play.

Acid Rain douses you in armour and health-depleting droplets, Double Taming decreases the time taken to domesticate a dinosaur, while the hilariously-named ARKtic Monkeys event drops two aggressive, poop-throwing mesopithecus on each player. Help or hindrance, each Evolution Event adds a little more fun to a match, and could be the key to thinning the herd of opposition.

Dead faces in the sky 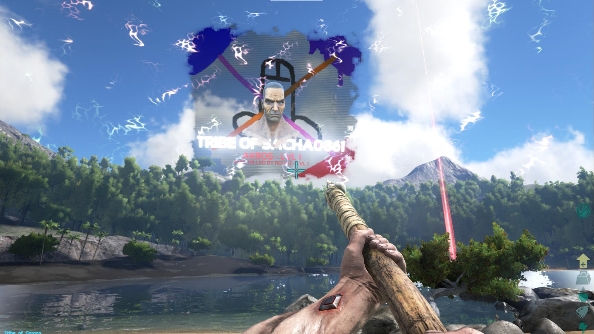 When a player succumbs in Survival of the Fittest, their portrait is projected into the sky; dead eyes and grumpy faces staring down upon the remaining combatants. Along with the booming note that accompanies it, it’s another feature ripped straight from the pages of The Hunger Games. Unfortunately they don’t come narrated by the wonderfully upbeat tones of Caesar Flickerman and Claudius Templesmith, but the system does have the intended effect: it’s a constant reminder that, no matter what kind of sanctuary you may have found in the jungle, the shadow of death is ever tracking you down.

Bet on the veterans 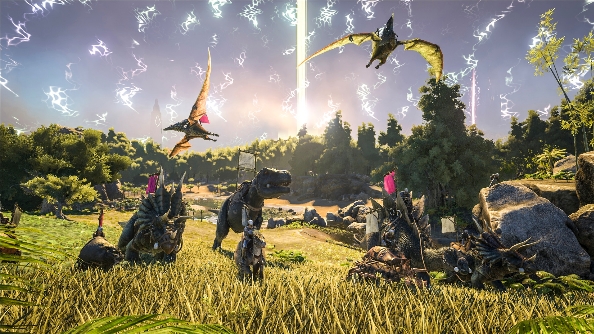 The most interesting thing about Survival of the Fittest is that it’s ARK, a premium game that you have to pay for, condensed into an hour-and-a-half. As such, the key to surviving is knowing how to find food, build shelter, and avoid the dangers of the natural world. It’s difficult to learn these things when there’s dozens of other players hunting you down, and playing Survival of the Fittest with no prior experience of ARK can be a bewildering experience. If you’re a veteran of the original game though, you’ve already got a head start.

In The Hunger Games, children selected from District One, Two, and Four are known as ‘careers’, and train their entire lives in anticipation of participating in the games. They already know how to kill and survive before entering the arena. If you’ve played and mastered ARK, then you’re already career material for Survival of the Fittest.

There is no escape 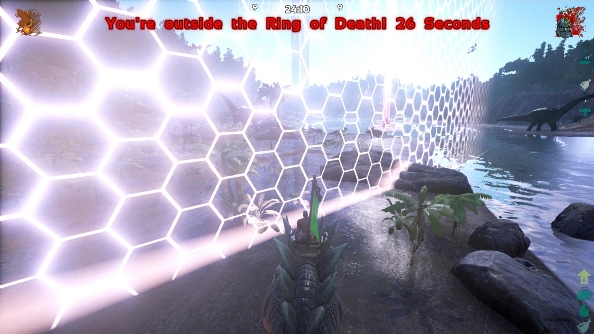 The ARK arena is surrounded by a force field that keeps all 72 combatants inside. Don’t go thinking there’s a clever way of getting out with a lightning bolt and spool of copper wire, through: that shield is unbreakable. Not only that, but it’s a shrinking dome: as time progresses the shield decreases in size, cutting off areas of the map and forcing the remaining players closer together.

Should the battle last the entire duration, the final moments are fought out in a small central area of the map where there’s nowhere to hide. You may be able to outwit 71 other players by simply hiding among the bushes, but when it comes to the one-on-one showdown your coward skills won’t save you. 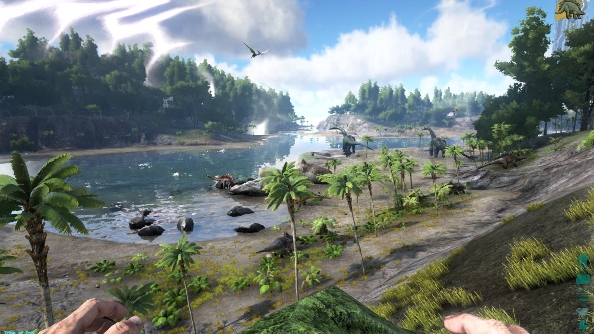 If you’re a fan of Katniss Everdeen’s dystopian universe, then ARK: Survival of the Fittest is a must-play, even if it’s just to experience a single match. If you can’t stand depressing young adult fiction, then this is the exciting bit of the world’s last big movie phenomenon without the emotional baggage and political overtones.

Since it’s all Early Access right now, the game performs with the elegance of a dancing stegosaurus, and all but the most powerful PCs will need to reduce the settings to ‘low’ before the game plays at an acceptable framerate. But while that makes things ugly, it doesn’t distract from the tension, excitement, and thrill of fighting for you life.

With continued support from the developers, ARK: Survival of the Fittest has the potential to be one of Steam’s best free-to-play games, and become something much more than just a Hunger Games tribute.

Have you played ARK: Survival of the Fittest yet? Let us know if the odds were in your favour in the comments.