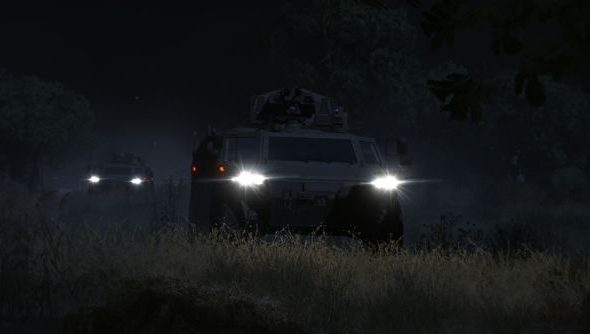 Good lighting design, like good sound design, is one of those invisible things that can make a game’s world feel a whole lot more like a real place. It’s one of the many things Arma 2 got absolutely right, but what’s Arma 3 doing to make it better? The answer is, unsurprisingly, many, many things.

A new blogpost from Bohemia Interactive’s lead artist Pavel Guglava details the all-new day/night cycle, HDR implementation and underwater lighting effects. There’s also a stunning video which deserves to be watched in full-screen HD.
Arma 3’s rendition of the inky blackness of night is impressive enough, with emissive light sources and muzzle flashes punctuating the darkness. But where it gets truly astonishing is in the overhead night vision views of the base, where a huge number of light sources interact with the scenery and terrain.
This represented a huge challenge for Guglava and Arma 3’s RV engine, which has to scale between close first-person and expansive aerial views. “Each scene contains a limit for lights displayed simultaneously to keep performance stable”, says Guglava. “To increase performance, we also use a technology to transfer distant lights – those with no effect on the scene – into the satellite map.”
Arma 3 also marks the franchise’s first dive into the subaquatic. Swimming is sorely missed in games, but understandably so: it requires six degrees of freedom from the game’s engine, as well as a whole host of weightless character and object interactions. Fortunately Arma 3 does a decent job of rendering underwater environments, with dappled sunlight entering from the surface as the obligatory fish swim aimlessly by.
The video is intended as a preview of what Bohemia Interactive will be showing off at E3 next month, and they’re promising much more information on the upcoming military shooter. We won’t keep you in the dark.