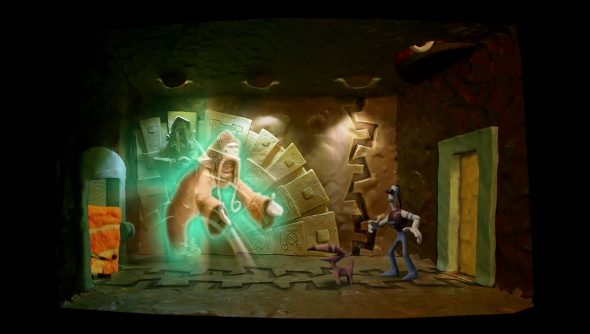 Instead of stuffing it into your mouth, you can feed your hungry eyes with a trailer originally shared with Kickstarter backers.

And *bang*, just like that I’m back playing Neverhood or the underrated platformer sequel, Skullmonkeys, the latter of which was responsible for this brilliant scene. I would summon and bargain with all manner of dark god nasties for more claymation games, but for the time being I’m at least content that one is on the horizon.

A spiritual successor to Neverhood, Armikrog puts players in the clay shoes of Tommynaut, voiced by Mystery Science Theater 3000’s Michael J Nelson, an explorer stranded on an alien world. He ends up thrown in prison, in the fortress Armikrog, along with his talking pooch, voiced by Rob Paulsen, the man behind Pinky from Pinky and the Brain.

It’s due out early next year.