There’s definitely a market out there for free-to-play tank games, as proven by the international domination of Wargaming’s World of Tanks. The strange thing about Armored Warfare isn’t what it is, it’s who’s developing it. Known for their prowess in RPG development, Obsidian seem like a strange fit for a game all about sexy tanks shooting each other with their sexy cannons.

When you actually sit down and think about it, though, Obsidian have plenty of transferable skills. One of the biggest will be in the sense of progression – unlocking new weaponry and upgrades that combat other upgrades your enemies might have, for example. It’s not that far removed from a mage casting a protection buff to dull the hit from an enemy warrior’s blade.

Then there’s Armored Warfare’s PVE mode, which sees players teaming up and facing off against the AI. Tactical battles against computer-controlled opponents are at the core of most RPGs, after all. This is also likely to be what sets Armored Warfare apart from its Eastern European competition. If you want to find out for yourself, phase 5 of the game’s Early Access testing is now live. 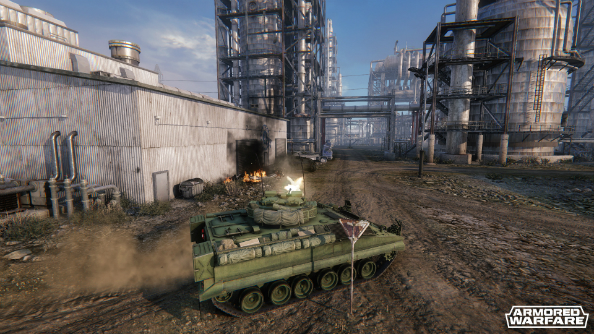 And there’s good news for veterans: if you took part in phase 4, all of your progression will carry over. There are also a host of new features, which are listed below in a handy, bullet point style:

The update isn’t all about additions, unfortunately. The ‘Base’ mechanism, which allocated players their very own military base, has been disabled for now to get it up to standard.

Phase 5 will continue from now until September 20. The full details can be readHERE.

In the meantime, watch this video of a really fast tank.