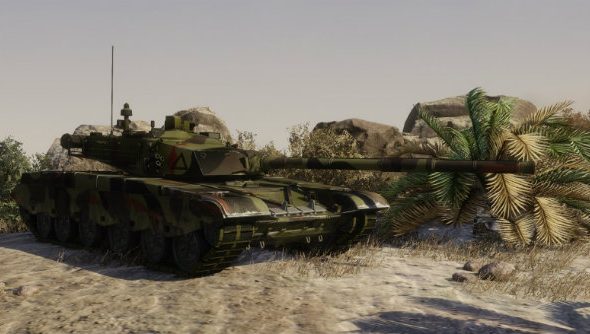 Armored Warfare’s incoming update is bringing the big guns, introducing a new arms dealer and a whole new fleet of vehicles to choose from – vehicles with guns… Big guns.

Do you agree with our list of the best free games on PC?

Armored Warfare’s new dealer,Zhang Feng, originates from China and has a really dull backstory that goes nowhere, but the point of it is he now sells tanks. Yes.

Access to Feng means access to seven new Chinese vehicles, and more vehicle lines from other well-known nations – along with more terrible backstories – are set to arrive in future updates.

I realise you probably want to hear Feng’s backstory now, so here it is: “Feng showed a knack for working with technology and electronics from early in his childhood. Later in life, he started working with a handful of classmates to build a military technology business, where he once held a position as the head researcher.”

Riveting stuff, huh? Anyway, tanks! Here are the ones you’ll get:

If those tank names are just numbers to you – and let’s be honest, they probably are – why not watch them in action in the trailer below instead. Words are for nerds anyway.

There’s also a new map coming in the update, and fortunately that doesn’t have a crappy backstory. The new map is called Coastal Threat and features a town on the Mediterranean coastline. It apparently favours ambushes and swift flanking maneuvers, so pick a light tank and use guerrilla tactics to get the upper hand.

Along with these new additions, some changes are heading to the tank battler. Tweaks will be made so rewards in PvE are similar to PvP, making sure players don’t favour one mode over the other purely based on benefits. Additionally, matchmaking is being improved, which is always nice.

Armoured Warfare update 0.13 is launching a coastal assault in Chinese tanks on February 11.