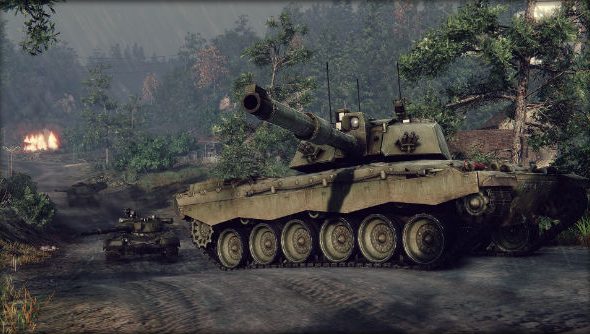 “Coastal Threat is a former tourism hotspot that has come upon harder times,” says the narrator in Armored Warfare’s latest trailer, as he describes the new map that’s coming to the free-to-play tank battle-a-thon in this week’s 0.13 update. As you’ll see, this appears to be a bit of an understatement.

We all love something for nothing. Here’s our list of the best free PC games.

‘Harder times’ likely conjures up imagery of closed shops, derelict housing and other such general economic downturn-like stuff for most of us. Yet in Armored Warfare’s Coastal Threat, as the narrator kindly describes, this in fact means tanks storming an urban centre, a beach and a charred forest with very little care for how much mess they create in their wake.

“Urban areas create natural conflict zones where main battle tanks brawl at close range,” the narrator adds. “While control of the city is important, artillery must position themselves in key areas with lines of sight open to areas to control the enemy’s movement from afar.”

We’re told that seeking out cover and using environmental elements to our advantage is essential in besting the opposition, and this new 1200×1200 meter PvP map will provide ample opportunity to do so – in attack, scouting and to prevent ever being flanked.

Update 0.13 will also introduce a new dealer and will add a refined matchmaking system. For PvE enthusiasts, its reward system has been redone meaning there’ll now be more in the way of reward opportunities.

Armored Warfare’s update 0.13 is due for release on February 11.