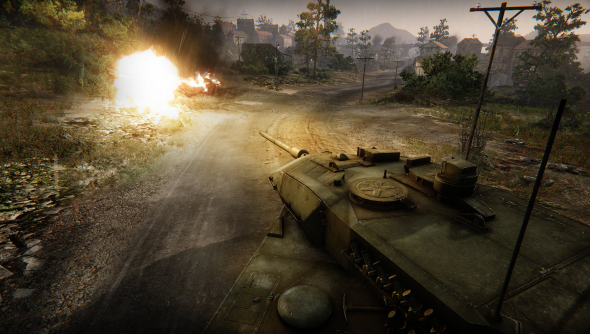 World of Tanks and War Thunder don’t leave much space for a third free-to-play tank game. Yet Obsidian think Armored Warfare’s in with a chance of capturing some of the market from those entrenched mammoths by aiming for two things neither of its competitors have attempted; a story campaign and modern technology.

Wargaming only include tanks before the early ‘60s because after that there was a significant leap in technology. Computerised systems and weapons gave post ‘60s tanks a huge advantage over their predecessors. How could a Tiger Tank fend off a guided missile launched from 20 miles away? It’s a balancing nightmare.

Obsidian are jumping on the untapped timeline, post ‘60s, letting you get behind the wheels of the most modern tanks in the field. Even a few prototype tanks (my fingers are firmly crossed for a railgun platform).

They plan to have 60 tanks available to play at launch.

However, cutting out the archaic tanks from World War 2 hasn’t solved Obsidian’s balancing problems. “We’re still trying to work out all the modern equipment and what impact that will have on the mechanics,” Matt Festa, senior designer at Obsidian admits. “we have to figure out how it’s going to work because a lot of these tanks have computerised systems, they’re not manual.”

Smoke grenades and and guided missiles are making an appearance but automatic defense systems for defending against incoming missiles may be made manual to engage players more.

Timeline aside, something Obsidian are offering that neither World of Tanks or War Thunder do is a co-op story campaign. “We’re going to put a heavy focus on making that as good as we can,” Festa says. “The idea that it’s a bit more cooperative that those straight up PvP modes.”

Story missions can be played solo though it will be a “challenge” or with up to five players. They’re structured around a set of arms dealers, Festa tells me. “The vehicles in Armored Warfare are provided by dealers and each dealer has a specific theme, they’ve vehicles based around that theme and a background and narrative that fits in the context of the greater story. Each dealer has a different suite of vehicles, different nations, as you establish a relationship with a dealer to get access to more vehicles and upgrades.” 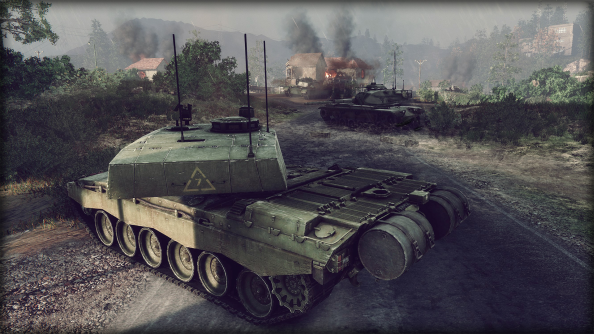 The mission I played had four of us searching a map for enemy-held ammo dumps and SAM sites. We picked a spread of complementary vehicles in the pre-mission screen – a recon vehicle called a Wiesel; two main battle tanks, a T-80 and a Crusader 2; and I chose a tank destroyer, the M1128 Stryker. .

Despite its different tank era, Armored Warfare plays a lot like World of Tanks. It’s a very slow, considered FPS. If you move too far out into the enemies’ line of fire reversing takes time, time in which the enemy can launch shells at you from more than a mile away. Even my comparatively fast Stryker was at risk of ever extending.

I was able to cover my mistakes with a plume of smoke, at least.

There were three outposts were spread across the map, each pitted with bunkers that could potentially hold an ammo cache. The outposts were ringed with SAM sites that we had to destroy within a strict time limit to complete our secondary objective for bonus points and resources.

Together we wound our way towards each base, our recon tank driving ahead to spot the AI tanks hiding on top of the outlying hills, allowing the more heavily armoured members of the team to flank and destroy them.

When we moved into a base the AI used the outposts’ structures for cover. Unlike in World of Tanks, we were able to blast through the walls of a number of buildings, revealing the tanks for a teammate to destroy.

I’ve not played enough World of Tanks or War Thunder to pick up on the fine handling differences between the three games, but I enjoyed playing Armored Warfare’s co-op missions far more than I have the other games’ PvP. I felt like I was actually succeeding.