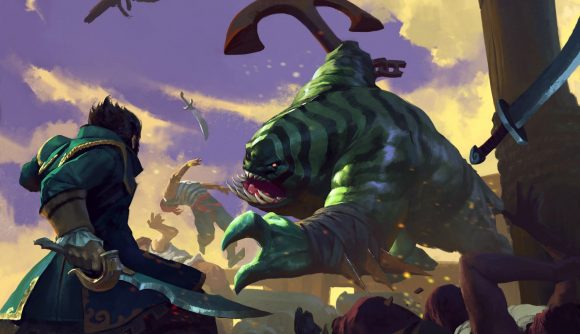 Card sharks around the world are eagerly anticipating the launch of the Artifact beta later this month. To whet appetites – and show off some previously unseen features – Valve is holding an Artifact preview tournament next weekend, November 10-11.

Valve says the tournament will host 128 Artifact players competing for a prize pool of $10,000 USD. You’ll be able to watch the all-draft tournament live on SteamTV, and it’ll use a seven-round Swiss bracket that kicks off Saturday at 9:00 PST. The top eight competitors from Saturday’s round will move on to a single-elimination championship round Sunday, also beginning at 9:00 PST.

Tournament rounds and seeding will all be handled by the Artifact client, which everyone will be able to use when Artifact launches November 28.

Valve had initially planned to open the Artifact beta in October, but late in the month sent an email to registrants informing them the beta would be delayed until November 19 – “We have a bit more work to do before letting everyone in,” Valve said in the message.

We’ve collected everything you need to know in time for the Artifact release date, put together a guide on how to play Artifact, the best Artifact decks you should try to build, and, if you want a deeper look, all the Artifact cards that are coming our way.

Watching the tournament will undoubtedly provide a cornucopia of new information about the game. We’ll definitely be tuning in.