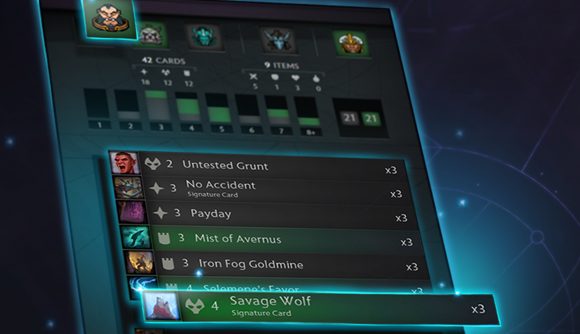 Valve will release Artifact in just a handful of weeks, but the company has already launched a set of tools intended to make life easier for community tools like deck builders. Valve just opened access to two APIs – one that’ll pull in images and text for newly released cards, and one that lets you generate deck codes that can be copied into the client.

It’ll take the community a while to build things out of this, but the possibilities are pretty exciting. A deck building website, populated with data on all the latest cards straight from Valve, could let you generate a deck and copy it straight into the game. You could easily browse top decks and move the one of your choosing right into Artifact.

Even without the benefit of these tools, sites like ArtifactFire already let you build mock decks online. Valve specifically cites initiatives like this in its announcement, saying “we hope the release of these APIs will not only empower tools creators, but will also make it easier for all players to share exciting new decks and theorycraft new ideas.”

We’re inching closer to the Artifact release date, and this news comes immediately before this weekend’s Artifact Preview Tournament. Tomorrow’s event will give us yet another close look at the Dota card game, and with these tools out there we may see some useful new additions even before the official launch. In meantime, here’s how to Play Artifact, the best cheap Artifact decks, and all the Artifact cards announced.

It’s going to be fascinating seeing the game being played at the tournament, just to get a sense of what the high level play will be.