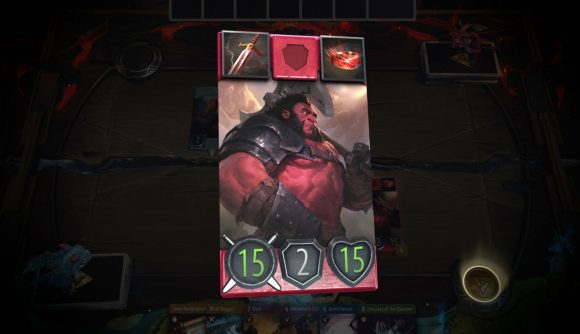 November 27, 2018 Artifact won’t let you see your opponent’s entire deck at the touch of a button.

Yesterday, an update for the Artifact beta went live that added deck trackers to the game, allowing you to view every single card in your opponent’s deck. It turns out that this was a bug, not a feature, and the latest update has reversed course and gotten the tracker working as intended.

That intended functionality will allow you to see your opponent’s cards as they’re revealed to you. So the tracker will show heroes and their associated signature cards at the start, then the remainder of the deck will be added as it’s played. Of course, you’ll be able to see your own deck list in full from the start.

The fix applies to almost every mode, with a couple of exceptions. In the patch notes, Valve says “it is intended that you can see the opponent’s full deck list during tournament games to reduce the value of scouting.” You’ll also be able to see your opponent’s deck in full while in private lobbies.

When the original update went live, the Artifact community was split. Most players seemed to be upset that the game’s Constructed mode – most similar to Hearthstone’s Arena – would be ruined if your opponent can see exactly what you’re coming into lane with, but other players feared it could ruin ranked strategy.

Ahead of the game’s release, check out our Artifact review-in-progress, or take a look at our Artifact card list if you fancy doing some theorycrafting. Or, if you’d rather, we’ve put together some of the best cheap Artifact decks, and a guide on how to play Artifact. You could have plenty of time to put aside for some Artifact-related reading material – the Artifact release times mean that European players won’t have access to the game until quite late at night on Wednesday.