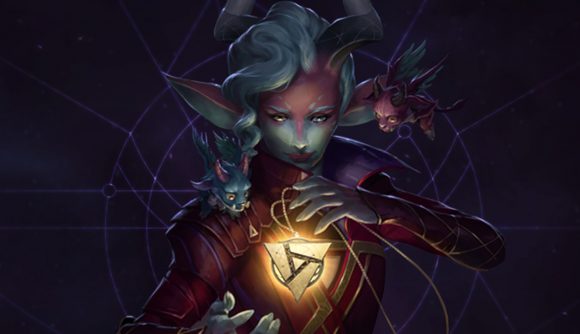 Artifact is out very soon, and Valve is providing ever more detail – including how draft mode will work and how much it’ll cost. Draft is part of Artifact’s selection of Gauntlets, which are modes of play that require entry fees and offer potential rewards for playing well.

Event Tickets come in packs of five for $4.95, and you’ll get a first five as a bonus with a base Artifact purchase. One ticket will get you into Expert Constructed, where you battle online with a pre-built deck, or Phantom Draft, where you build a deck from cards out of a series of packs. Either way, you’re aiming for five wins before suffering two losses in order to get the best prizes.

In Keeper Draft, the rules are basically the same as Phantom Draft, except you get to keep the cards you pick. That means it’s more expensive than the other Gauntlets, with an entry fee of two tickets and five card packs, but the rewards are better too. Three wins get you two tickets and a pack, four wins grant two tickets and two packs, and five wins naturally pay out two tickets and three packs.

These paid modes are just a slice of the content detailed in the new ArtiFAQ, part of what Valve calls its ‘expert’ category. Social play lets you join in user-made tournaments and private lobbies, or open play among friends and Steam communities. Casual play gets you into bot matches, matchmake with constructed decks online, or enter into free constructed Gauntlets.

Bot matches offer one especially notable feature: you can build your opponent’s deck using any card in the game, whether you own it or not. That means you’re not limited to your own cards when it comes to working out your strategies here.

The Artifact release date is scheduled for November 28. That’s a $20 purchase that gets you two base decks, ten card packs, and as this recent reveal has detailed, five Event Tickets.

To get on top of its rules, we’ve written a how to play Artifact guide, collected together some of the best cheap Artifact decks, and, if you want to dive deep into the possibilities, you can check out all the Artifact cards announced.

We don’t have long to wait until Artifact launches so it’s good to brush up now if you want to mop up some early wins in multiplayer.