Artifact is a game that trades in epic scope, dispensing with the narrow focus of other digital CCGs by expanding it across the multiple lanes of Dota. That gives it a sense of sprawl, with elements on each battlefield interacting with the next. This means you’re not just managing three independent fields of cards – you’re managing three fields of cards while looking at the interdependent effects they can have on one another.

Each lane has its own tower – take down two to win the game – and each tower can get improvements to offer either passive buffs or active abilities. One improvement might let you send damage against a unit anywhere you want across the map. Casting spells offers a similar sort of back and forth, with coloured magic only playable when you’re in a lane that has a hero of that same colour. With each lane having an independent mana pool every turn, you’re left with a choice – do you spend a lane’s mana to improve it immediately, or get something into play in a different field?

It’s difficult to call Artifact accessible, spread as it is across all these lanes with respawning heroes needing regular redeployment and so many resources needing management at any given time. But that all information is presented concisely and clearly. You can quickly scroll around to see other parts of the board while your opponent is considering a move, allowing you to survey the field and make the right call.

Valve is aware of this complexity, and in places it has taken it out of the player’s hands. Take the attack system, in which heroes and creeps randomly select foes to target based on who’s adjacent to them. This is one of the things that keeps the game from becoming overwhelming, selectively paring back the scope of what you have to interact with while giving you further opportunities to take advantage of those mechanics. 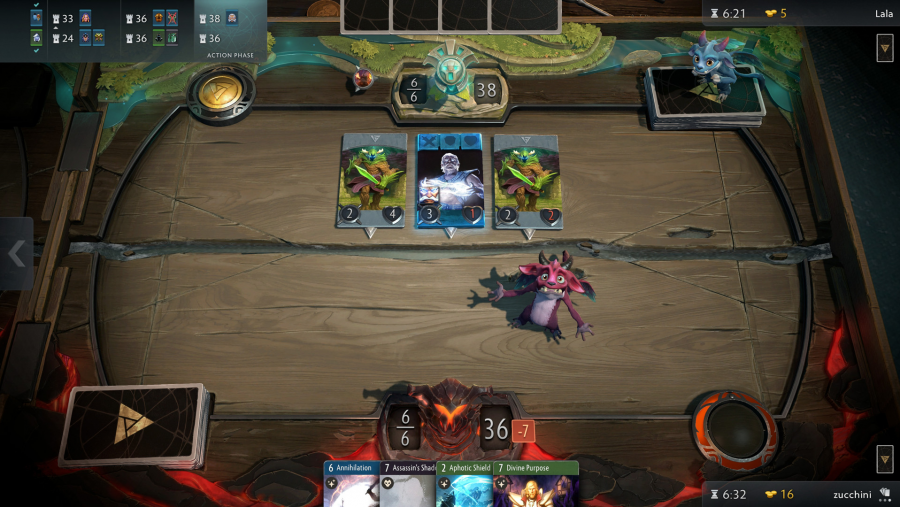 In one instance, I was able to play a certain unit – one which grew stronger every turn – out of range of any enemy attacks. That gave me a way to build an overpowering super-unit over the course of a handful of turns, all by working around an otherwise random gameplay system.

It makes Artifact feel like a game of managing a battlefield rather than of playing cards. You’re watching over three different fights, pulling resources from one to go to another, and deploying heroes where they’re needed most as they respawn. Your hand becomes a selection of tools to use across the field, with a options that have you weighing impact on one side of the field versus another. You can specifically drop focus on certain lanes to bolster your offense in others for a sneaky victory.

Valve tells us the team wanted to build a game with scope beyond the existing realm of digital cards, and that’s exactly what Artifact presents, chasing after the craziest multitiered moments of games like Magic. 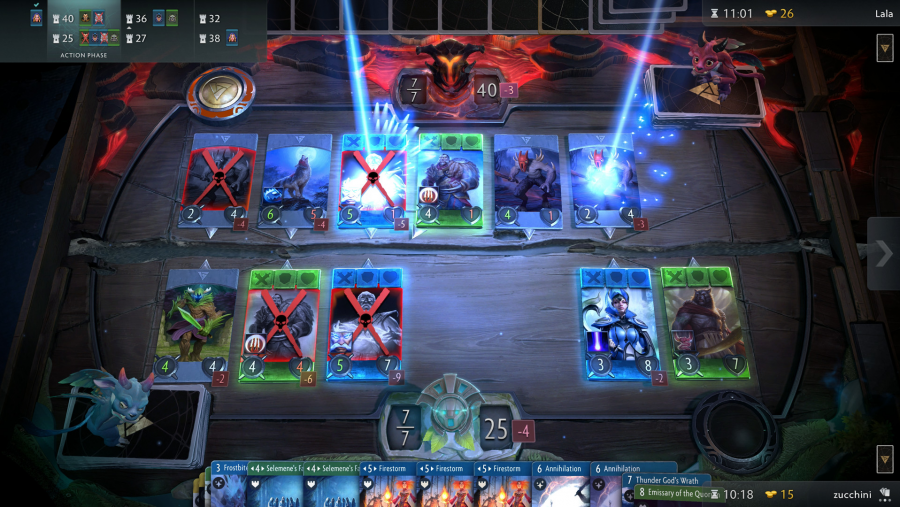 There’s a reason why we’ve moved from the meme-spawning groan that accompanied Artifact’s announcement to the uproarious response the game got at this year’s International. Cynically, the ‘Dota card game’ sounds like Valve chasing after an existing market in a decidedly un-Valve-like way. But Artifact carves out its own identity by going beyond those existing games in scope.

I didn’t have a full grasp on Artifact by the end of my hands-on time – there were plenty of variables I missed, decisions I could’ve made better, and mechanics I couldn’t grok in the first couple of matches. But nothing felt overwhelming or out of reach. Valve’s doing a tremendous balancing act by building a game of such complex mechanics while managing your interactions with them such that it feels simple and intuitive.

We’ll see whether Artifact’s complexity translates into long-term depth starting in November, but the early results are promising. Given Valve’s penchant for playtesting at every level, there’s reason to suspect the final game will make good on that promise.