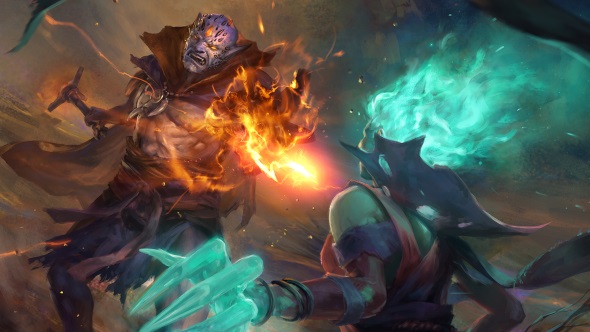 Artifact and Dota share the same world, and the card game will have a real reason for existing within the world of Dota 2. In an interview with Eurogamer, game designer Jeep Barnett confirmed that Artifact’s lore will be told through multiple sets of cards released over time.

Here’s everything we know about Artifact.

In the interview, Barnett confirms that Steve Jaros, a writer on both Dota 2 and several Saints Row games, has written for the game. He also states that Artifact cards “are created within the Dota universe,” (in much the same way as Hearthstone and Gwent), but says that the first set of cards will explore “a big three way battle between various factions.” The set will feature Dota’s Bronze Legion, the invading Red Mist, and the Vools, and will focus on a struggle between the three groups.

Subsequent sets will continue the story, and the outcome of the first set will have an impact on later expansions, both in terms of story and the cards themselves. That means that “characters you see in one set will have a new version in another set,” and previous events will be drawn on in later sets. Characters can age, change, or even die between sets of cards.

The game’s lore will be told primarily through in-game voice lines. We already knew that Artifact’s heroes talk to one another on the battlefield, and Steve Jaros tweeted at Dota 2 influencer SirActionSlacks last year to say “I got so much lore for you, you’re not even ready.” There are reportedly “thousands of lines” of lore in the game, and each character has multiple lines for every combination of allied and enemy characters they might come across.

@SirActionSlacks I got so much lore for you, you're not even ready #PlayArtifact