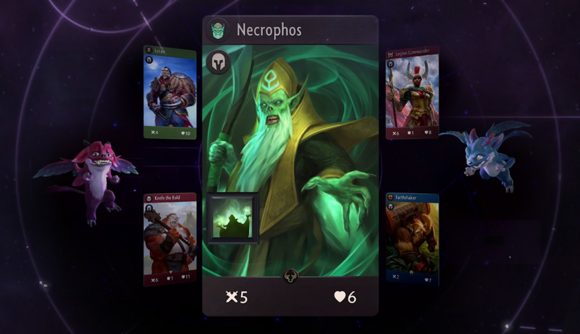 Death in videogames is usually a bad thing, but Valve’s Artifact is set to make you rethink that truism. A new breakdown from designer Richard Garfield explains that a hero isn’t done when it’s dead, because your hero isn’t really dead at all. That card comes back after sitting out a turn, and it returns with all of its upgrades intact.

That means you can keep powering up your heroes with equipment and modifications, secure in the knowledge that those will remain even after death. Since Artifact is played across three lanes, you might actually be able to take advantage of that death to redeploy a powerful hero in a more advantageous location.

One example of death strategy comes alongside the hero Necrophos and his Heartstopper Aura. That makes him deal two piercing damage to enemy neighbors before the action phase. If Necrophos is in play, that’s a local threat. If Necrophos has that modification and is ready to redeploy after death, he’s suddenly a threat against every card across the entire board.

“A good player will find themselves intentionally not killing an enemy hero so he or she can’t redeploy to a more useful location,” Garfield says. “With great force of will I can restrain myself from killing an enemy hero in these circumstances. A good player may even find themselves pulling the trigger on their own heroes so they don’t have to rely on the shop providing a town portal. I confess, I can’t bring myself to do that.”

Garfield’s strategic breakdown is the first bit of content on the newly-relaunched website, proving that the Artifact release date is lumbering ever closer. You can follow that link for much more info on the Dota card game, including what to expect from the impending demo. And, while you wait for that, here’s how to play Artifact, the best cheap Artifact decks to look forward to, and if you want to build you own, all the Artifact cards coming our way.