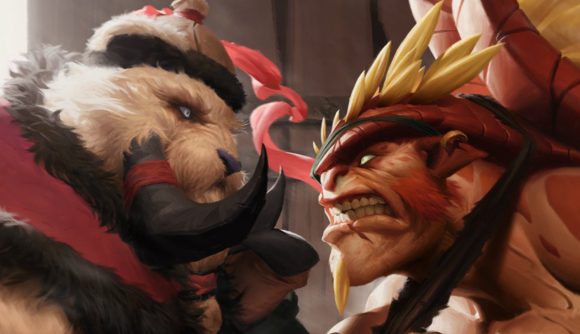 The Artifact beta has been rumbling on for a couple of weeks now, but the vast majority of players have been waiting until this week to get their hands on Valve’s upcoming dota-themed card game. As of this morning, we have a (nearly) exact release time, so here’s when you’ll be able to play.

The official Artifact Twitter account posted last night to say that “we are aiming to release Artifact between 1 PM and 2 PSM PST on Wednesday,” and that the game’s page on the Steam store has been updated with that information.

My initial take away from that is that it’s a very vague tweet – I might have imagined that the people who literally own Steam could have chosen a more precise release window, but hey. It’s also worth pointing out for clarity’s sake that the tweet refers to tomorrow, Wednesday November 28. The final thing I’d note is that a 1-2 PM release on America’s west coast means that European fans will likely be staying up pretty late if they want to play on release day.

When we checked Artifact’s Steam page, it stated that the game will unlock “in approximately 1 day and 7 hours,” which takes us to 14:00 PST. We’ve based this post on that, so here are the exact Artifact release times.

It’s worth remembering that the game could launch up to 60 minutes ahead of this time, should Valve stick to its ‘between 1-2PM’ line from the tweet below. Whatever the case, Artifact will be available to play by the (very) end of the day tomorrow across the Americas and most of Europe.

We are aiming to release Artifact between 1 PM and 2 PM PST on Wednesday. Steam store updated to reflect that time window.

If you haven’t been playing the beta but are planning to jump in tomorrow, you might like to check out our Artifact review, or you can take a look at our Artifact card list and get theorycrafting. Though, if you want to dive straight into the action, we’ve put together a few of the best cheap Artifact decks, too. And, if you want the basics, here’s how to play Artifact.

A few things are still set to change in the game, partly in response to backlash over the game’s ‘pay for everything’ approach, but the true state of the game likely won’t be revealed until Valve’s legions of fans get it in their hands later this week.