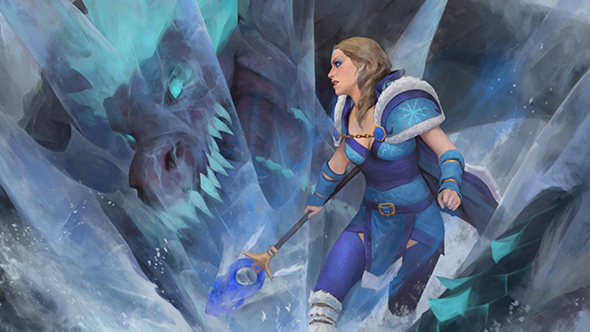 Last night, Valve finally showed off Artifact, their card game set in the Dota universe. If there was only space for one card game, then this would be Valve trying to take the crown from Hearthstone, Blizzard’s hugely successful CCG.

Valve founder Gabe Newell doesn’t talk about it in those terms, however. He sees Hearthstone as a benchmark.

For more on Valve’s card game, here’s everything we know about Artifact.

“Hearthstone is a great game,” Newell told us during yesterday’s presentation. “Right now we would say it’s the benchmark online trading card game. Blizzard do a lot of really smart things and obviously we’ve been fans of Blizzard and Blizzard products for a really long time.”

Certainly, from what Ali has played of Artifact, it looks like Valve’s card game is radically different from Hearthstone. Artifact is significantly more complex, with play taking place across three separate boards and with novel systems like an automated creep wave spawning into the game each turn. Artifact is closer to Magic: The Gathering than Hearthstone, which is unsurprising considering that game’s creator, Richard Garfield, is working on Artifact.