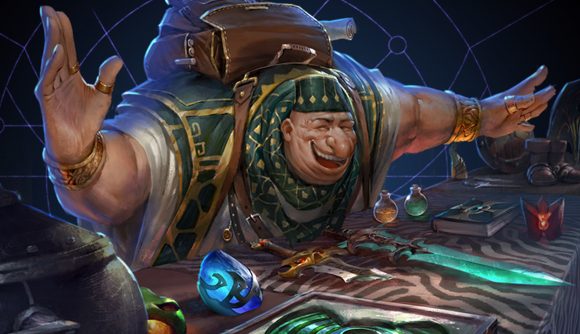 Valve’s Artifact came and went distressingly quickly, and a year after going underground, the developers are ready to talk about their plan to bring back the card game. The big revision we’ve been hearing about as ‘Artifact 2‘ is getting a beta, and while Valve has not yet been specific on when the beta is starting, the devs are starting to explain the big changes.

“In the new version cards are unlocked through play,” Valve says, and the official post makes repeated assertions about the new monetisation model that suggests this isn’t just for the beta. “We aren’t selling cards, so you won’t face an opponent with a stacked deck,” Valve says, and later adds that “we have some ideas about what we’d like to sell, but none of them are cards/packs.”

Artifact’s ‘every card has value’ monetisation model was controversial from the start, and while it fit in with Valve’s experiments with the digital market – from the Steam store itself to tradable, sellable items in TF2 and CS:GO – it looked unfavourable against the mostly free-to-play world of card games like Hearthstone.

Major gameplay changes are coming, too. You’ll now have access to all three lanes at once, and while cards will still usually affect only one lane at a time, Valve’s making changes to help prevent shut-outs. “Individual cards are likely to have been changed, removed, or brand new,” so don’t expect your old decks to remain in the new game.

The beta is currently in testing at Valve. When it’s ready, invites will start to trickle out, prioritising people who purchased the original Artifact. The game will eventually go into open beta from there. Valve’s got no specific timeline on when these releases will happen – only that the game will leave beta “hopefully quicker than Dota 2”.

Valve chief Gabe Newell has been candid about the card game in recent interviews, saying that “Artifact was a giant disappointment” which he hopes the company can learn from. Seems we’ll soon learn what those lessons have taught.