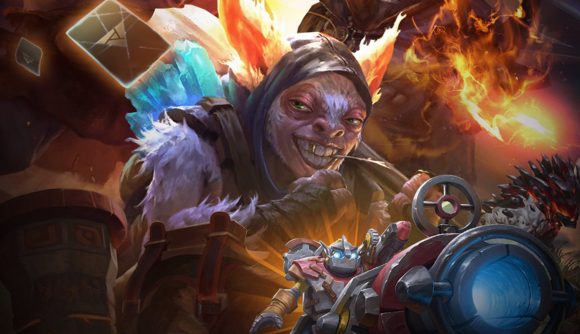 You’ll be able to watch Artifact in action today, as Valve launches a preview tournament for the forthcoming collectible card game. The tournament will run begin today at 9:00 a.m. PST, with a finals round kicking off tomorrow, also at 9:00 a.m. PST.

When the tournament begins today, pre-orders for Artifact will open through Steam – which happens to be where you’ll be watching the competition, if you decide to do so. The tournament is being hosted by esports production company Beyond the Summit, and it’ll be streaming through SteamTV.

The preview tournament is set to pit 128 players against each other, and it’s being run right in the Artifact client – the game handles all the brackets, seeding, matchmaking, and scheduling. Today’s contest will be an all-draft, seven-round Swiss bracket event, with the top eight players advancing to tomorrow’s finals rounds. Up for grabs is $10,000 USD in prizes.

The tournament also serves as a kind of unofficial soft launch for SteamTV, which until now has only been broadcasting Dota 2. Valve’s streaming service promises to integrate SteamWorks and Steam Chat, which means there are a lot of interesting possibilities for the platform.

In any case, this weekend is an opportunity to see Valve’s spin on the digital card genre actually being played, and that’s an exciting prospect for players curious about how the Dota-themed CCG is going to feel in practice.

The Artifact release date is later this month, although The International attendees will get a shot to play a bit early when the beta launches nine days earlier. In the meantime, here’s how to play Artifact, the best cheap Artifact decks, and, if you want to dive in deep, here are all the Artifact cards available.

It’s going to be great seeing how pros play Artifact. It’s a game that allows for rich synergies between cards, so seeing experts play should reveal the strategic depth of the game.