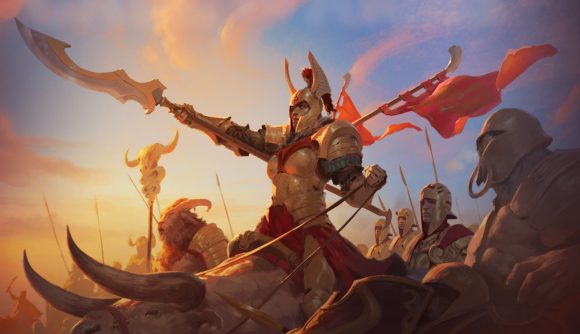 March 29, 2019 Valve is stepping away from Artifact updates for more substantial revisions.

The last major update for Artifact came on January 28, and the most pertinent patch note was the point where Valve said the studio was “still in it for the long haul.” It turns out that haul is very long indeed, and today the developers have put out their first statement on the game since. The short version is that you shouldn’t expect any more updates for a good long while.

Valve says that its plan after launch “was to immediately dive into our normal strategy of shipping a series of updates driven by the dialogue community members were having with each other and with us. Obviously, things didn’t turn out how we hoped.” And if you need a reminder of why, just check in on the Artifact player counts.

“Artifact represents the largest discrepancy between our expectations for how one of our games would be received and the actual outcome.” In an effort to address that dichotomy, Valve says “Moving forward, we’ll be heads-down focusing on addressing these larger issues instead of shipping updates,” and that these updates will take a “significant amount of time.”

Exactly what those updates will entail remains to be seen, but Valve’s talking about a big re-examination of pretty much everything, including “game design, the economy, the social experience of playing, and more.” So whenever Artifact comes back, you can expect it to look much different.

Prospects for the game have seemed grim since launch. The player counts have occasionally dwindled to double digits, and the value of a card collection has been on a steep downward trend. It’s going to be an uphill battle for Valve to turn around the stats – and player sentiment.

Deal yourself in: Check out the best card games on PC

Despite an excellent core, Artifact has so far failed to draw in new players or hang onto many of the folks that did give it a chance. Here’s hoping Valve figures out the formula to turn things around. It will, indeed, be a long haul.