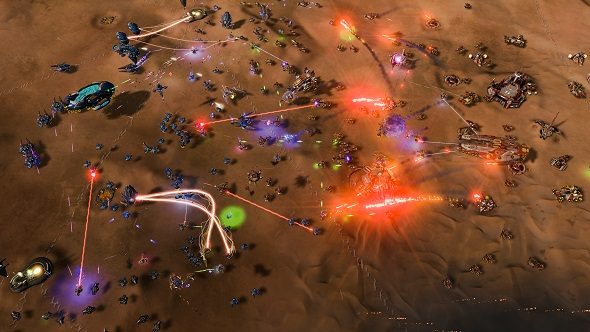 With the recent release of v2.1 for Ashes of the Singularity: Escalation, Stardock have decided to celebrate by discounting this grand space RTS until March 2. If you are at all interested in large scale combat and have been waiting to get into Escalation on the cheap, now is your chance.

Commander, these excellent PC strategy games may be useful to you.

The release of version 2.1 adds a whole host of features, with many of them helping new players to become more effective battle commanders. There is now a single player observation mode, where players can watch AI generals battle it out, by creating custom games with specific parameters. You can use this as a possible training tool or as a way to see if a bunch of normal AI players can combine their might to take down a single Insane AI.

Version 2.1 adds a special unranked match option for multiplayer, which is perfect for testing out new strategies or simply playing more chilled out, casual games. You can now also turn off supply lines at the start of a match, which makes it so you don’t have to constantly keep checking if all of your surrounding regions are connected to you central Nexus in order to gain resources. When combined with unranked matches, this update is great for giving low level or new players a way to acclimatise themselves to the raw basics of battle, before launching into full scale warfare in ranked.

“In addition to making some adjustments with AI visibility and balance, we’ve added features that players have been asking for, like the single-player observer mode,” said Derek Paxton, Stardock’s Vice President of Entertainment. “You can learn how the AI makes decisions by watching it battle during customized games using any settings or parameters you want.”

Three new maps have been added into the mix, set in Russia, Spain and Italy respectively. There have also been a number of balance changes, which you can check out in full via the changelog on the Ashes of the Singularity forums.

So, if these new features have piqued your interest and you want to smash up some robots, Ashes of the Singularity: Escalation is now available on Steam for $19.99/£14.99 until March 2.