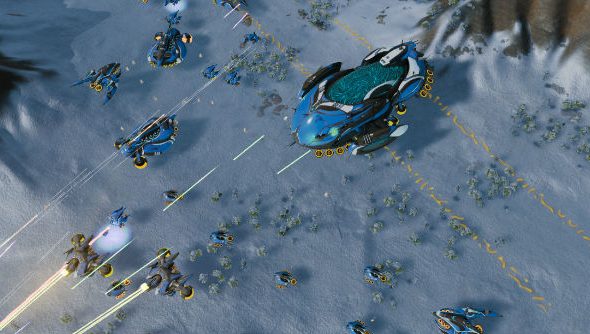 Ashes of the Singularity is Stardock’s latest space-flung sci-fi adventure that’s billed as the “world’s first native 64-bit” real-time strategy game. In short, it’s a resource-hungry affair whose main draw is its ability to support sprawling battles with thousands of individual units scouring its war zones at any given time. “Unprecedented size” is a term that’s been used to this end since the game entered Early Access late last year – a feat that’s made possible courtesy of its purpose-built, native DirectX 12-supporting Nitrous engine that enables your CPU’s cores (the game requires a quad-core processor as a minimum) to send simultaneous instructions to your GPU.

With this in mind, your first port of call when firing up Ashes should be its built-in benchmark tool, where you can tinker with your video settings to get the most out of your game. It’s worth noting here that although Ashes’ grandiose scale requires its minimum system specs to be higher than average, the barrier of entry isn’t especially high. For example, while the game recommends you opt for DirectX 12 (which requires Windows 10) – and also champions itself as one the first to offer full support – I didn’t notice much of a difference, besides a few gained, yet unnoticeable, frames. 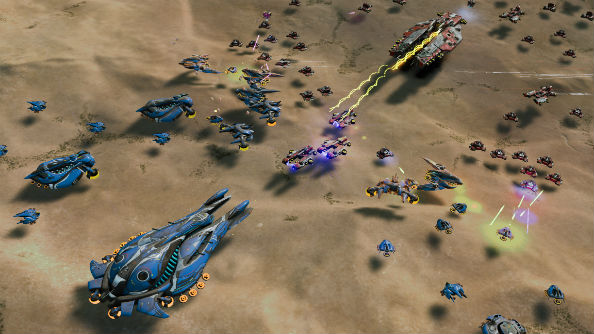 From my Nvidia GTX970, I was able to run the game at 2560×1440 with the majority of settings on high – anti-aliasing was set to 2x, though – and achieve around 34fps. With these settings I was able to run everything smoothly while marvelling at how positively wonderful it all looked. Running the benchmark for the three minutes it takes to do its thing is a joy to behold too, and acts as the perfect precursor to diving into battle, if for nothing else but to wonder at its sense of scale and truly remarkable audio – the latter of which is capable of sending shivers down your spine. Seriously, I can’t stress that last point enough: ramp your speaker volume up the to max and enjoy the roar of explosive, laser pinging, interstellar warfare. As an aside, for more on Ashes’ multi display adapter, see Phil’s writing on how DirectX 12 lets you mix NVIDIA and AMD cards, and the performance boost it can offer.

Onto the game itself. Ashes’ wears its Supreme Commander and Total Annihilation influences on its sleeve – complete with a camera view that can zoom all the way out, to the point where you’re ordering micro machines around a grid; before zipping all way in, so that you’re so close to the action you can almost feel the grinding of a Hades aircraft’s gears. The UI is missing a strategic zoom, but hitting space brings up a strategic map overview which does the same job and doesn’t take too much getting used to.

Ashes also operates a familiar streaming economy to Supreme Commander, whereby you build extractors to obtain resources from the land, however strays from SupCom’s escalating tier system, instead at times echoing Company of Heroes in the way it requires you continually hunt down resource points. Metal and radioactives are the game’s primary resources and regions will typically house one or the other, whereas Turinium and Quanta make up the rest – the former used to boost intelligence and achieve critical mass; the latter needed to boost unit output – thus much of your strategy hinges on your ability to manage all resources simultaneously. 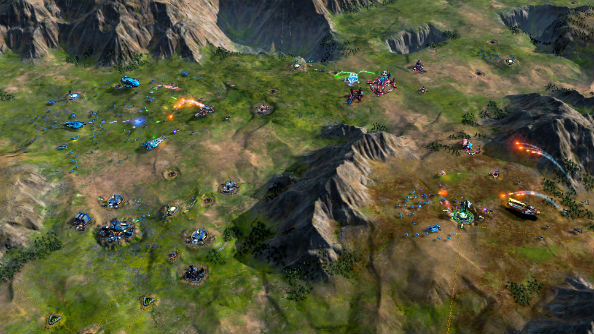 Furthermore, resources are consumed as you use them in Ashes, meaning you can queue up as many as you like. Whereas other RTS games – such as, say, StarCraft – only allow you to build things as you have the resources to do so, Ashes lets you queue resources infinitely, and resources are split across all of your projects. This begs you to play Ashes in the same way you might approach a game of Chess – each game operates on a macro level, where you’re rewarded for long-form strategy and thinking a few turns ahead, as opposed to click speed or quick thinking.

Ashes’ single-player campaign goes by Ascendancy War. It serves to frame the game’s background lore and at present includes one episode and a last-man-standing-type King of the Hill scenario. Episode one, named ‘Imminent Crisis’, sees you fighting on behalf of the Post Human Coalition as you set off on an 11-mission crusade to make sense of the recent, burgeoning Substrate alien threat. Like the game’s tutorial, the first few assignments guide you through the basics, drip-feeding you new skills and abilities as you go, while giving your actions a sense of purpose in-line with the game’s story foundations.

Mission one, for example, simply sees you manning a scout vessel, performing reconnaissance and learning how enemies out of sight are depicted on the map. Fast-forward a few assignments, and you’re tasked with staging an ambush on a Giant Brain Whale – yes, it is as powerful as it sounds – and its Overmind convoy. Things get messy rather quickly, but this bout rewards you with your first full-on, speaker-bursting engagement that requires you throw everything you’ve got at the enemy force. Again, the rambunctious shriek of gunfire, laser cannons and explosions is truly remarkable, so much so that I was almost disappointed when the lumbering mechanical cetacea-a-like was eventually defeated. 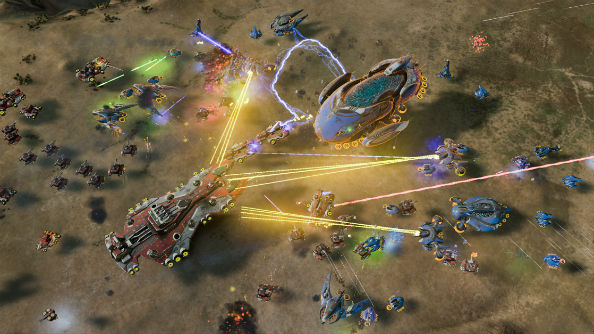 Later levels offer several paths to victory – including the ability to send orbital units behind enemy lines to establish remote bases, which is great fun even in failure – thus opting for the right strategy becomes just as challenging as organising troops, mining resources and fending off the increasingly brutal alien onslaught. Depending on how well you organise all of the above, episode one should take somewhere in the region of eight-to-ten hours to complete, with Stardock planning to release further episodes down the line. Stardock also plan to add Steam Workshop support at a later date to let players create and share their own scenarios, which is certainly something worth watching out for.

Although Ashes’ single-player campaign is good fun, Skirmish mode is by far its most fulfilling. Each map – of which there are currently 25 – is split into regions, each with its own power generator and neutral guard units. Ultimately, Skirmish mode is a race for resources whereby you’ll strive to conquer each power station you discover, mine its capital, then move onto the next; all the while ensuring previously occupied regions don’t fall while you’re out exploring. Both the Post Human Coalition and the alien Substrate are playable in Skirmish, the latter of which requires a very different approach to combat as it’s not simply a reskin.

Large scale armies of course make for large scale battles, which is where Ashes shines. Air units provide radar and visual coverage, and can bomb targets; whereas ground units are comprised of anything from small frigates around 50m in length, to humongous, kilometer-long Dreadnoughts. These are your best form of offence, as, besides from their size, they employ a veterancy feature that lets them gain experience with each passing battle. The more experience they accumulate, the more likely they’ll level up, thus acquiring new abilities in turn. 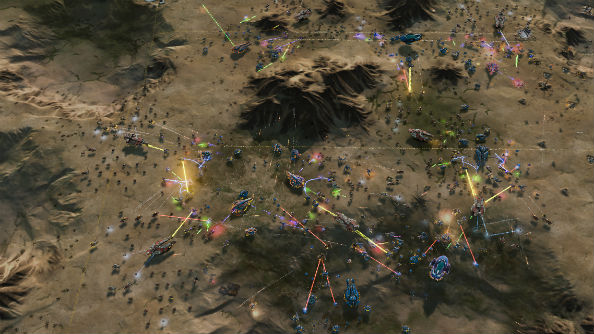 When grouped together, ‘meta units’ – bundled units used to form armies – behave as one singular force and can act autonomously under instruction. As you’ll quickly learn, this proves imperative as and when large scale battles relentlessly unfold. During one Skirmish set piece, one of my units was on the cusp of defeat, and by the time my medical team arrived on the scene we had our backs to the wall. Death looked certain, before a friendly artillery unit appeared on the edge of the war zone and started picking off foes at range. There were too few of us to do any damage, but many of the enemy units turned to face the artillery fighters, thus allowing me adequate time to get patched up and get out of harm’s way.

This moment perfectly illustrates just how fluid Ashes’ enemy AI is and how well it translates to battle. Using multiple CPU cores, the AI constantly evaluates and reevaluates its surroundings which in practice creates an opponent that appears prone to, or at least capable of, error. In the above instance, the enemy would’ve fared better by wiping my medics and I out first, before turning its attention to my artillery units on the flanks. By getting distracted, the reaction felt more realistic and thus my successful escape felt just as satisfying as conquering that region would have done.

And this works both ways. There were other occasions where I felt slightly cheated by my enemy’s skills, however decided their success was down to sheer luck and not predetermined dexterity. Granted, much of his is smoke and mirrors, but is also testament to the way in which the game presents it AI. 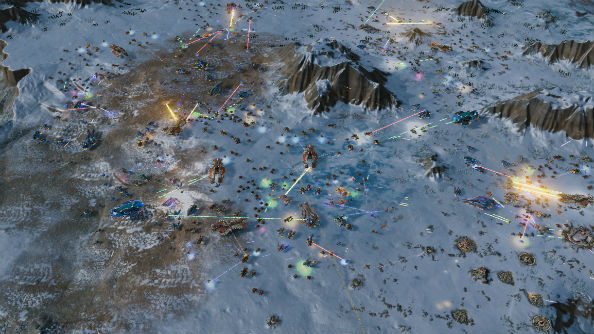 Examples like the above are also part of what makes reviewing a game like this challenging, in that so much of your experience will lie in moments of circumstance. This is a game which looks spectacular, sounds downright amazing, implements engaging systems and ticks all of the What Makes A Good Real-time Strategy Game boxes, however its true beauty comes from the moments I’ve experienced that you never will and vice versa. With more campaign episodes due further down the line, not to mention modding and Steam Workshop support, it seems Ashes of the Singularity can only get better.

Fans of Supreme Commander and Total Annihilation will lap up the similarities, but Ashes of the Singularity is far more than a clone. When you take all of this into consideration and add unsurpassed scale to the mix, you’re definitely onto a winner.