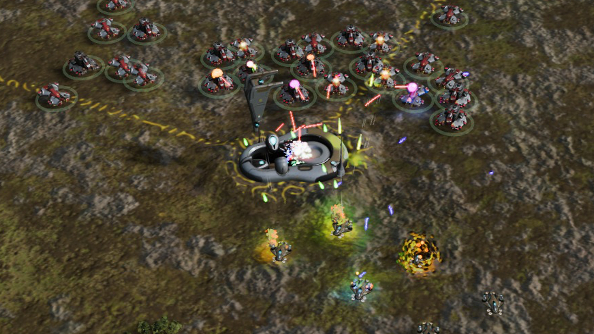 NVIDIA announced their new line of Pascal GPU-powered graphics cards last Friday (at, um, 2AM if you’re on UK time), and that was of course greatly exciting. But in among all the boasts about the GTX 1080 and GTX 1070’s improvements in terms of performance and efficiency over the company’s current 9-series cards, there was little in the way of benchmarks or specs. Enter Ashes of the Singularity, destroyer of frame rates, ultimate test of graphical chops.

Want more ways to test your hardware until it sweats profusely? Try the best VR games available for PC.

Several benchmark reports from GTX 1080s have appeared in the Ashes of the Singularity database over the weekend, and they give us the first insight into the card’s potential performance. With a few provisos, obviously.

Looking at the data as it appears on the Ashes site, it’s not immediately clear how it performs relative to the most powerful sample from this current generation. It appears to be languishing in 15th position, like some sort of silicon Sunderland. Why is there a GTX 970 above it? And why does an AMD R9 2-series top the chart? Well, firstly they’re arranged by score, which is a fairly abstract amalgamation of various metric that the Ashes benchmark pulls together.

Secondly, the vast majority of cards the GTX 1080 keeps company with up there are dual-card, overclocked setups. All of which is to say – looking at that page doesn’t tell the full story of the GTX 1080’s performance.

Here’s a better indicator, from /r/nvidia moderator Nestledrink. There you can see all the GTX 1080 reports at 1440p, with frame rate and score. Arranged that way (and let’s not forget that an NVIDIA moderator did so) the new card comes out trumps in performance, as you’d expect from the company’s announcement on Friday.

What’s interesting is that there’s a bracket of around 3 fps between all GTX 1080 cards tested. We don’t know if any of those cards were overclocked, but it does give an indication that there’s decent uniformity in performance between cards, which isn’t always the case when a new manufacturing process rolls out. 3 fps is more likely the result of spec differences elsewhere in the system than dodgy capacitors on the graphics card.

So, to answer the headline as best I can: the GTX 1080 is really bloody good at Ashes of the Singularity. It’s the best single-card performance logged to date, and we’ve yet to see how much further that can be pushed by third-party cards with different coolers and stock overclocks.