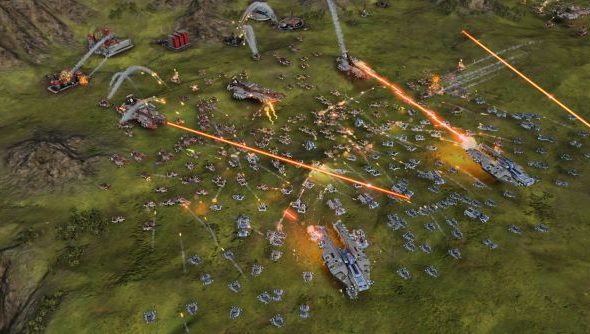 We haven’t heard much from Stardock’s Supreme Commander-like Ashes of the Singularity since Fraser’s preview in March. It had a light showing at E3, mostly on the AMD stage as an advertisement for their new graphics tech and DirectX 12. It IS stunningly pretty, with thousands of units facing off against each other across huge maps, massive armies clashing in what can only be described as a real war. With real guns.

If that sounds like your jam, you can now get access to an alpha version of the game with a founder’s pack on the official site. It’ll set you back $50 and is distributed on Steam. There’s a page of info on what to expect at this early stage and what the minimum requirements are. It looks like neither the complex AI or DirectX 12 benefits are currently available, but you can play multiplayer.

For just over $100 you can instead grab the Lifetime Edition which guarantees access to all future DLC and expansions. According to Stardock, they plan on making three full expansions and sixteen DLC packs available across the game’s life cycle, and those are just minimums. The lifetime edition can also be purchased as an upgrade, however, so there’s no reason not to give the game a shot first before going in deep.

Here’s the latest footage of Ashes, from the AMD stage at E3:

Looking for quick gameplay impressions? A thread on NeoGAFbreaks down what some folks in the alpha have thought so far.