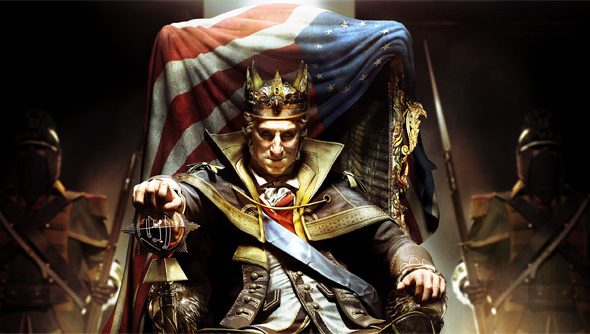 Pond-crossed patriots, cover your ears. The husky voiceover setup for Assassin’s Creed 3’s first morsel of DLC plays so easily into the hands of casual anti-American commentators you’re simply better off not knowing.

Still here? If you insist:

“What if the story of America was not the one you knew? Revealing a nation born not of courage and of brotherhood, but of greed and desire for absolute power? A constitution built atop the blood and ashes of the innocent? An empire fed only by war and death?”

Now here comes the inevitable sardonic quip: “Yes. Imagine.” But we’re better than that, aren’t we readers? What’s more, as PC gamers we have an insatiable taste for all things pulp – and let me tell you, this one’s so pulpy it’s practically papier mache.

Ubisoft’s alternate American origin story will play across three singleplayer DLC episodes, and see George Washington succumb to the allure of both despotism and the way solid gold chairs cool his bad back in the hot Boston sun. Somebody ought to stop him before the contemporary universe is ripped to shreds and Homeland ceases to exist. Why not you?

“History is our playground, and Assassin’s Creed teams have always loved playing with historical facts and their consequences as a way to better understand a time period.” said Sebastien Puel, Executive Producer at Ubisoft, two months ago. “While Assassin’s Creed III concentrates on history as it happens, we wanted to take some liberties with this DLC and tell you how things ‘could have happened.’”