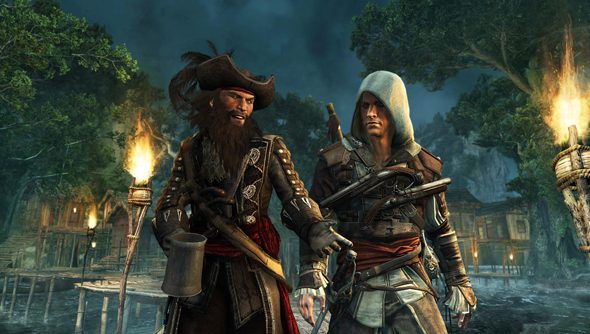 Edward Kenway has important tasks ahead of him. There is the construction of a pirate empire. The salvaging of a ship. The recruitment of a crew. The overthrow of slavery.

But first, he must air assassinate an Ocelot.

There’s a confidence and ambition to Assassin’s Creed 4 that I can’t help but admire. It’s still an Assassin’s Creed game: it is a game in which you explore an open world, climb towers, fall into haystacks, stab men, run away, and occasionally bribe prostitutes to pretend to be your friend.

Then, there’s this whole other game. The pirating game. The game in which you roam the Caribbean, ambushing shipping, stealing their crap, and spending the booty on a new figurine for the front of your boat.

The genius, the thing you have to play to appreciate it’s impact, is that there is so little division between the two worlds. You step away from the wheel of your ship, catch a rope and swing ashore, landing in the waves with a splash and laugh. Suddenly, you’re frolicking on shore, leaping from tree to tree to chimney to tree, eventually landing on the face of an ocelot.

The confidence? It shows in the writing: the mushy and flaccid cutscenes that plagued Assassin’s Creed 3 are gone. Exposition never overstays its welcome – they’re tight and focused and full of character. It shows in its self aware sense of humour and knowing winks to seasoned players: completing side missions and exploring the world unlocks cheats and bonuses that, it seems, end with you staffing your ship with an undead crew.

But mostly, it shows in the scale.

There is an entire open world on foot Assassin’s Creed game waiting to be played on the island of Havana – with multiple cities, forests, mountains and beaches to explore. There are more cities elsewhere, including Nassau, Kingston and a pre-disco Florida. Then there’s the ocean itself – teeming with tiny little islands, shipwrecks and reefs to explore, the inhabited ones including the usual towers to scale, and wheelbarrows of straw to leap into.

Truth be told, it’s the scale that has me most worried. Assassin’s Creed games can be exhausting. There’s the make-busy work of unlocking the towers to reveal the map, to start. Then there’s the inevitable upgrading of your character’s armour and equipment. Add to this in Assassin’s Creed 4 the building of your ship – which can be upgraded with new weapons, armour and figureheads, a trading mini-game (captured ships can enter your fleet and be sent on trading missions outside of the main map) that’s the equivalent of Brotherhood’s assassination contracts.

There’s the collect ’em all Animus fragments to pick up, along with collectible sea-shanties that float in the breeze – grab them and you’ll unlock a song for your crew to sing at sea.

And, now, there’s a crafting system, lifted pretty much entirely from Far Cry 3, that has you hunting animals and materials ahead of purchasing upgrades. 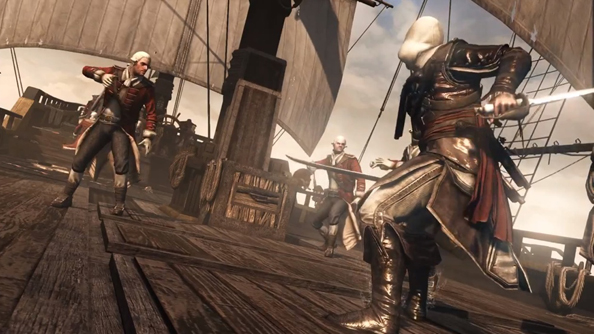 Here’s the other problem: some of the mini-games might not be all that. The underwater diving sections aren’t good. They’re actively bad. It’s a frustrating mixture of time pressure – running out of air added to by sharks circling the reef forcing you to hide in seaweed, but also, awful controls. Assassin’s Creed 4 has forgotten the fundamental law of underwater sections: if they’re not as good as those in Mario 64, then you should remove them from the game.

The sea-hunting game, too, where you harpoon sharks in exchange for crafting materials is weak – it’s just you throwing spears at a fin until it stops wriggling.

But I’m still going to play it, and I’ll tell you why.

We’re spoiled for wet bits in this year’s games. I could dink around on GTA’s jetskis all day. But Black Flag’s brine is something else – it churns and rumbles, pitches the ship up and down, crashing against the surface. At high-speed, with the sails unfurled, screaming across Black Flag’s ocean fills you with a rare sense of freedom.

For all the distractions, for all the scale, it comes to this: bouncing along the swell with a band of pirate-brothers, singing shanties and peering into the horizon.

A pirate life is oddly appealing.