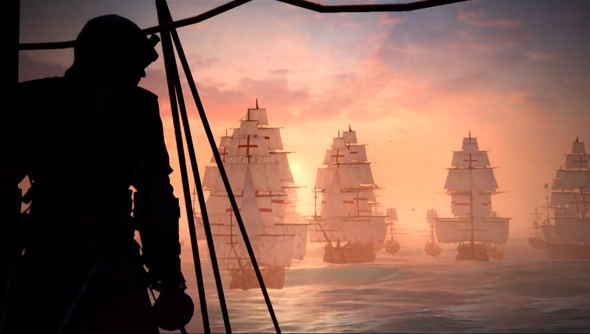 Assassin’s Creed IV looks excellent. It’s all the joy of running and diving about with swords and the silliness of pirates but for all its positives it doesn’t involve stealing yourself a horde of pirates. So do not be mislead by the new trailer’s title. Pirate Heist is in fact about pirates who steal. So, er, all pirates.

It could have been called Pirates Pirating.

Underlying the video is a snippet of story about stealing gold but really that’s only a small thread of what is otherwise a character roster. The Assassin’s Creed games have always been proud of their historical roots and how they then shove weird science about transporting dull people into the past to learn about how cool their ancestors were and how they should be equally awesome.

This trailer is like the Assassin’s Creed 4 who’s who. It has Blackbeard, Anne Bonny, Calico Jack, and other miscellaneous pirates. There’s no sign of The Pirate Captain or Albino Pirate. They may be secrets held back by the marketing department.

The release date for PC’s been announced as 22 November.