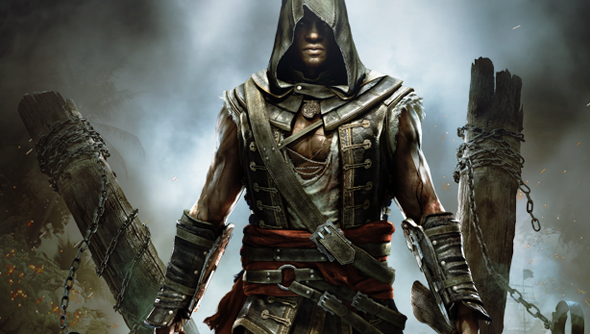 Assassin’s Creed IV is a game about freedom, but for Adewale it’s a relative concept. It’s he who installs Kenway at the wheel of the Jackdaw – knowing that your crew won’t accept a black captain. For the rest of the game, he stands at your side, arms folded – a musclebound bulk of steadfastness and loyalty, but also a symbol of subservience, repeating your orders.

He’ll finally step out from Edward’s shadow in Freedom Cry – a single player DLC chapter with a new ship, a new map, and a new plot about slavery of a more overt kind.

Freedom Cry is developed by Ubisoft Quebec – one of the eight studios who contributed to the game proper – and picks up Adewale’s story 15 years after the events of Black Flag. He’s become a committed Assassin, his own man, but finds himself shipwrecked in St. Domingue – modern-day Haiti, and the former setting of the PS Vita’s Assassin’s Creed: Liberation.

Thankfully, he doesn’t stay grounded for long – he finds a new brig in the Experto Crede, and claims the ports of St. Domingue, Port-au-Prince and the surrounding seas.

There, he sees some of the most brutal slavery of the time – but according to lead writer Jill Murray, one of Liberation’s scribes, “he does not make freeing other slaves the point of his existence.”

“He chooses piracy, and then he chooses the Creed,” she told UbiBlog. “For many people in history who were slaves, once they managed to free themselves, they just wanted to be left alone to live their lives in peace. And so they would turn to subsistence farming, raise a family, that kind of thing. I think it’s a very human reaction to not necessarily want to go back and get re-involved with slavery.”

The Assassins’ goals, too, don’t necessarily align with those of the local oppressed, despite their highfalutin talk of liberation for all. Freedom Cry will see Adewale caught between his own lifestyle and Creed, and a desire to tackle the very visible systemic slavery visited upon St. Domingue’s Maroon warriors.

Like BioShock Infinite, Assassin’s Creed IV hits its racial themes on the nose rather than via the fantasy allegory we’ve come to expect in videogame social commentary – and most of it is delivered via Adewale. But Murray has been careful to ensure he hasn’t become a vehicle for message.

“He’s not standing in for every black man who was ever a slave in the 18th century,” she said. “He’s Adéwale. He’s the character we know. He has the wit that we’ve come to expect; he has heart. We see him as an older guy. He’s matured and changed in some small ways. I think those are the kinds of character details that always take precedence over pretty much everything else that can happen in the story.”

Freedom Cry will be available for $9.99 from December 17.

As DLC goes, this sounds pretty much essential. But my first thought was: “Gosh, there’s so much to do in the West Indies yet”. How many of you lot are in a position to take on a new captainship already?