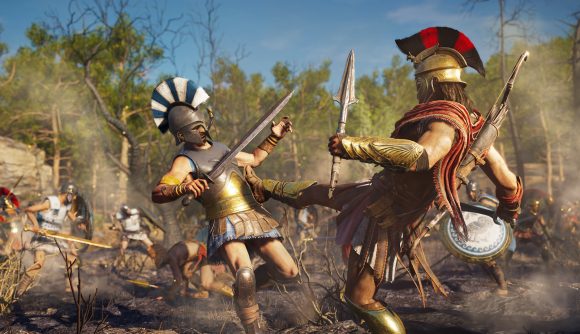 Ubisoft is having trouble launching Assassin’s Creed: Odyssey’s epic mercenary events, having had to cancel two of the limited time contracts twice now. By way of a thank you for the community’s patience, the team has activated a weekly epic ship event and a limited time discount on the legendary item sold by one of the game’s merchants.

The epic mercenary events are supposed to drop an extra hard enemy into each players’ world and place a contract on the fighter’s head. These events will keep Assassin’s Creed: Odyssey alive and changing in player’s hands but things haven’t gone to plan so far. The first event was supposed to go live on October 17 and then another on October 30 but technical problems forced the team to cancel the events’ activation.

“We discovered that the content didn’t properly appear for a majority of our players,” community manager Dominik Voigt wrote on Reddit. “It wasn’t satisfactory to have an event available to only a portion of our players, so we decided to temporarily remove the Epic Mercenary Events from the game altogether until the issue is resolved. We are working on a fix and are hoping to introduce them later this month. We will provide an updated ETA as soon as possible.”

In the meantime, Voigt announced that the team will “activate 1x Epic Ship Event each week moving forward. And as a thank you for your patience and understanding, we will be activating a discount of -80 Orichalcum for the Legendary item that Sargon (Oikos of the Olympians) will sell next week.”