Depending on how you choose to play your version of Alexios or Kassandra, Assassin’s Creed Odyssey can feature a lot of sex. That’s true to the Greek literature I read in my literature classes, though Odyssey doesn’t go the extra mile in historical accuracy by burdening you with various sexually transmitted diseases. But thankfully you can feel the burning fury of herpes with Hirpes the Burning Fury.

Hirpes is one of the many enemies you can meet as part of Odyssey’s Mercenary system, which is bit like the Nemesis encounters from the Middle-earth games. These enemies wander the map and will come after you if you end up with a bounty, livening up any botched stealth encounters. Not all of them share names with infectious diseases, but Hirpes is special.

Her in-game description reads “Hirpes was known as one of the cruelest mercenaries. It’s said she often knocked her victims down and tied them to a giant log. She would then cut them and pour salt in the wounds, preparing them for the flames. She loved the smell as much as she loved the screams.”

I haven’t been afflicted by Hirpes yet in my Odyssey playthrough – the game randomly assigns mercenaries at each tier as you level up – but based on Reddit reports it looks like she’s got some perks related to fire damage, so you can really enjoy those burning sensations. You can go commit one of those adultery sidequests afterward if you want help spread Hirpes’s fury. 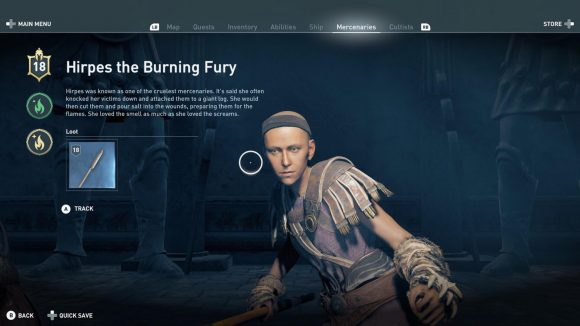 You can get a leg up on Hirpes with our guide to Assassin’s Creed Odyssey abilities. If you’re wondering about Odyssey’s historical accuracy, you can follow that link to find out exactly how well the game depicts the ancient Greek world. (Though now we’re going to have to follow up on Hirpes.)