Assassin’s Creed Odyssey is a large game. This enormous slice of Ancient Greece is full to bursting with countless islands, governments to topple, and god penises immortalised in stone for you to climb. There’s plenty to do, see, and stab, so we’re here with our top Assassin’s Creed Odyssey tips to help you make sense of it all. And to assist you with climbing as many naked men as possible, obviously.

Ubisoft’s Mediterranean romp through Greek history sees you play as a mercenary – Alexios or Kassandra – caught up in the turbulence of the Peloponnesian War between Athens and Sparta. Territories change hands constantly as Conquest battles bathe the land in Ancient Greek blood. To make matters worse, you’ve got a mysterious cult and some rather persistent mercenaries on your tail as you piece together what became of your separated family.

If you’ve not plugged yourself into the Animus for a few years, you won’t have witnessed the series’s leap of faith from a stealth-focused action-adventure game to a fully-fledged RPG. Ubisoft has continued the roleplaying-related changes that started with Origins and you have an even better skill tree with which to upgrade your character.

Your Assassin’s Creed Odyssey abilities and skill tree works a little differently this time. Hunter, Warrior, and Assassin trees return but you can choose from each. You also choose abilities that can be assigned to and unassigned from certain keys. The 300-style Spartan Kick is a highlight, but you shouldn’t miss your passive skills, especially Critical Assassination.

In Origins, it’s possible to find enemies that are too powerful for your trademark hidden blade – you’d perform a stealth attack rather than an execution, giving the enemy a chance to respond. This is much more common in Odyssey. To prevent crawling behind a powerful foe and having to run away sheepishly, make sure you invest points in Critical Assassination. If you have the time to hold the button to initiate it, you should find that one-hit kills are more common. That way, your stealthy cover is ensured. 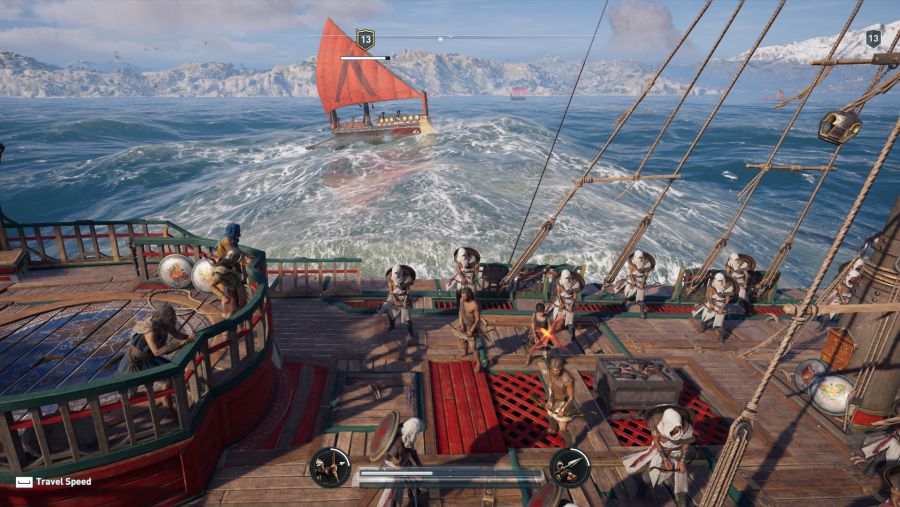 Ship gameplay dominated Assassin’s Creed IV: Black Flag as you sailed between the islands of the 18th century Caribbean archipelago. After only being given a bit part in Bayek’s Egyptian trip, you can sail the seven seas once again. The Adrestia is Odyssey’s Jackdaw, and you’ve got plenty of upkeep on your plate if you don’t want to get sunk by nefarious pirates.

Make sure you’re picking up as many items as you can find – especially floating booty bobbing across the waters of the Med – with which to put towards Adrestia upgrades. First, however, make sure you’re investing materials in the hull. That means you can beef up the exterior of your ship so it can take a few bashes from an enemy ram, and for the first few times, it allows you to appoint extra special lieutenants. These star crew mates – who bestow bonuses such as extra weapons and armour – can be invited to join you through story missions, or by simply knocking them out and dragging them back to your ship. 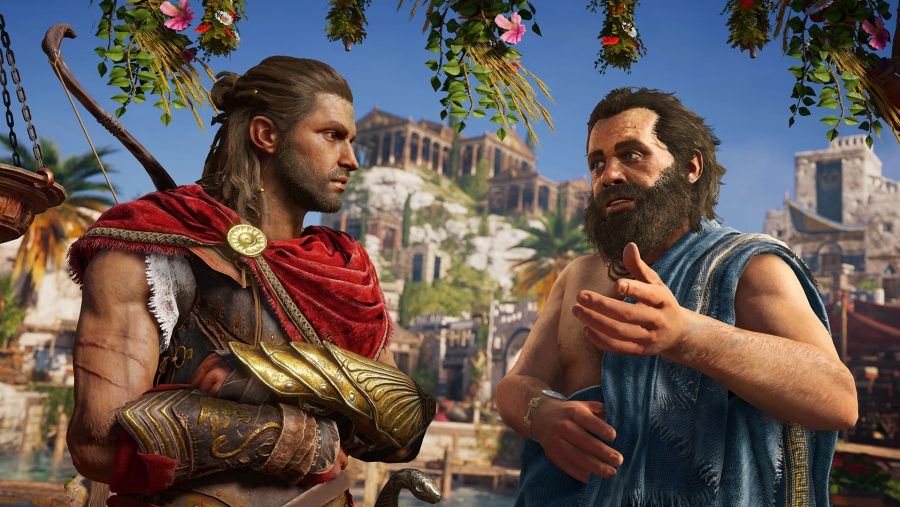 Assassin’s Creed Odyssey is not the kind of game that’ll be finished in one sitting. Nevertheless, at times you may find that you fancy blasting through the main narrative. If you’re interested in fast levelling, though, make sure you don’t miss out on the side missions that crop up all over the map.

Yep, not only can Assassin’s Creed Odyssey’s side missions boast some of the entertaining vignettes in the game, they’re one of the best ways to get a whole heap of experience points to help you progress quickly. Missions tend to take you to areas of the map with a question marked stamped on it. Typically, they’ll have a checklist of activities to complete, so finish these off as your passing through to most efficiently hoover up XP. 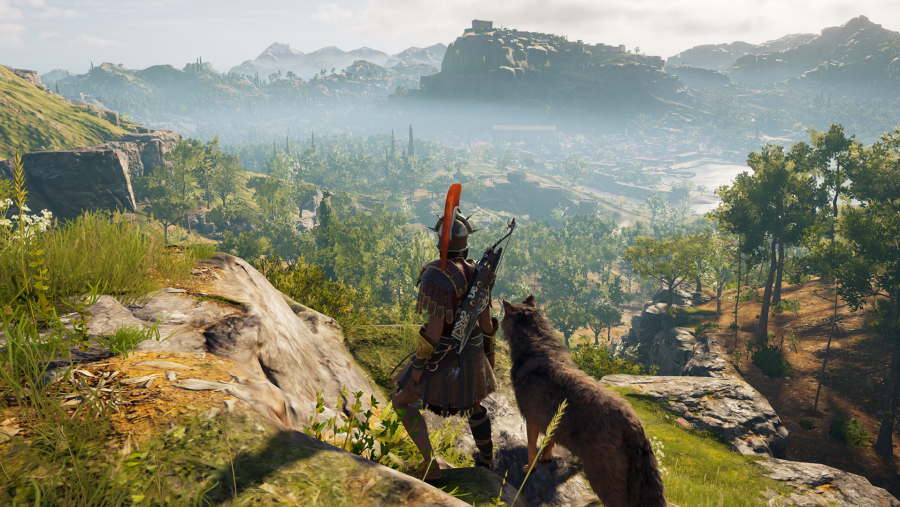 Long travels can get lonely without a buddy. What’s great about the company you can keep in Assassin’s Creed Odyssey is that, with the Beast Master ability, you can get a furry friend to fight with you. If you select this skill, you can tame a wolf in the game to fight alongside you.

Like special lieutenants for your ship, wolves need a bit of persuading before they will join you. In this case a knuckle sandwich is the order of the day, rather than a delicious slab of meat. But, once you’ve proved your dominance, you have the opportunity for a wolf to follow you around. Your new bezzie isn’t just useful for helping you kill people, either. Sometimes, when you’re on your own at the top of a mountain, cleaning bandit blood from your weaponry, having the company is just pleasant. 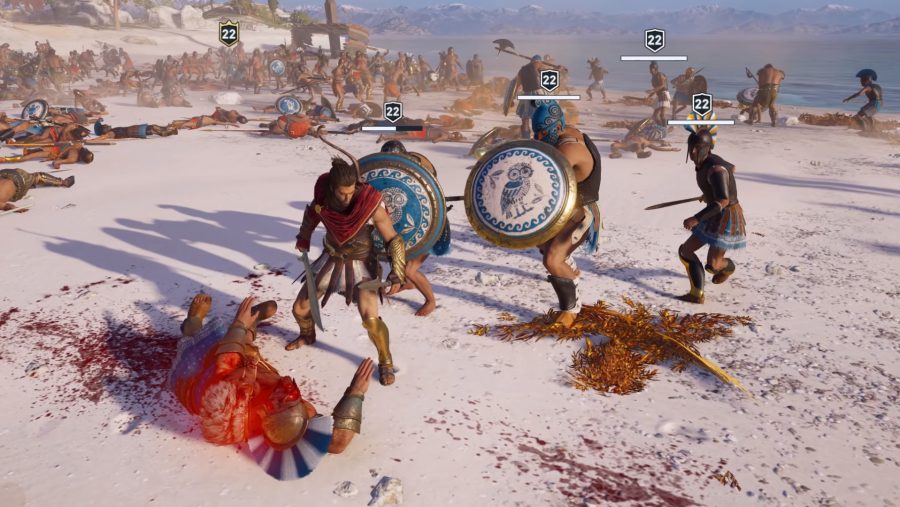 Invade as much as you can

Your journey is set against the bloody backdrop of the Peloponnesian War. But you’re no bystander as Athens clashes with Sparta for the chance to write the Greek history books. As you’re passing through you’ll discover that certain territories are controlled by either side. By killing soldiers, stealing valuable treasure, and burning supplies, you can undermine their leader’s authority. That gives you the chance to easily defeat them and start an all-consuming conquest.

As you’re a simple mercenary, you have the freedom to fight for either side. And, since mercenaries are typically motivated by coin alone, supporting the invading force is always the better bet. If you successfully bring about regime change in a region, you are guaranteed two bits of legendary gear, as opposed to the one you’re certain to claim if you support a defence of the realm. That said, invading is tougher. If your skills are up to it – and if you haven’t given anyone a good Spartan Kicking for a while, get the flickers of revolution started.