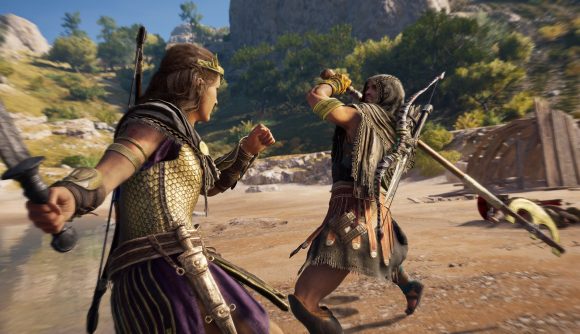 Assassin’s Creed Odyssey was a pretty big part of the Google Stadia announcement at GDC earlier this year. Google showed it working on various platforms and from within YouTube, and it looks like it will be a Stadia title. However, it appears that not everyone at developer Ubisoft was completely convinced about the service at first – the senior producer of the game has said he initially thought the Stadia “will never work,” but it seems trying Doom out on it changed his mind.

Marc-Alexis Côté, who was Assassin’s Creed Odyssey’s senior producer, has told Edge magazine (issue 338) that, on the topic of the Google Stadia, he “was a proud non-believer at the beginning.” He was taken to see it first-hand and it appears he wasn’t hugely keen at first – he said “my boss forced me to go. He put me into a car to drive me to Montreal. I was like, ‘Why are you wasting my time? That stuff will never work.’”

However, it looks like once Côté saw and tried out the Stadia in action, he changed his mind. Although, he said, “Google demoed it and I was rolling my eyes, wondering when I can go back and work on the game” he explained, “then they put the controller in my hand, and oh! I couldn’t tell the difference.”

Côté added that “they were streaming Doom from Toronto, using a connection from a phone, which was pretty remarkable. I couldn’t tell the difference. I was like, ‘I’m seeing the future now.’” According to Edge, it was this demo that resulted in Assassin’s Creed Odyssey being the guinea pig game for Google’s Project Stream – an early test stage for its streaming tech which has now become the Stadia.

It sounds like one question Côté has remaining ties into how many players will be able to get stuck into the Stadia’s streaming service based on their internet connections when it launches: “Does everyone have the internet connection to be part of the future? We’ll know when they launch, I guess. I certainly hope so.”

The Google Stadia is due to launch in the US, UK, Canada, and “most of Europe” in November.