How do you find and beat the Minotaur in Assassin’s Creed Odyssey? This mythical beast is one of four creatures in the game, and must be defeated in order to access the finale of one of Odyssey’s major questlines.

After discovering Atlantis, you will unlock a new quest line: The Gates of Atlantis. To operate the gate, you will need to gather four different artifacts. Each artifact is in the possession of a mythical beast. In this instance, we’ll be retrieving the artifact from Messara, which is held by the Minotaur.

To begin this quest, seek out the Myths and Minotaurs quest, located near the eastern border of Messara Island. It’s worth noting that this is not one of the quest lines found around the Minotaur-obsessed region of Pephka (although you should endeavour to do those, as they are highly entertaining). The Myths and Minotaurs quest will introduce you to a young boy called Ardos, who’s father ventured into the legendary Labyrinth of Lost Souls in hunt of the minotaur. Ardos will take you to the labyrinth’s entrance, but you will need a key to venture further in.

Completing Myths and Minotaurs will trigger stage two of the quest line, Of Minotaurs and Men, which is divided into three side quests: Blood in the Water, Full Circle, and Recollections. Complete all three to gain access to the labyrinth.

To complete Blood in the Water you’ll need to find Swordfish, a dangerous mercenary, who was last seen in Octopus Bay. Head to this area and talk with the locals to discover new information. They’ll ask you to do some busywork, but you will eventually be led to a nearby cave where Swordfish is hiding.

Full Circle simply requires you to head to the quest marker at Phaistos Village to meet with Ardo’s caretaker, which is a very basic quest. Similarly, heading to the nearby quest marker for Recollections will put you in touch with the collector. He’s after Theseus’ armour, which acts as a simple fetch quest. 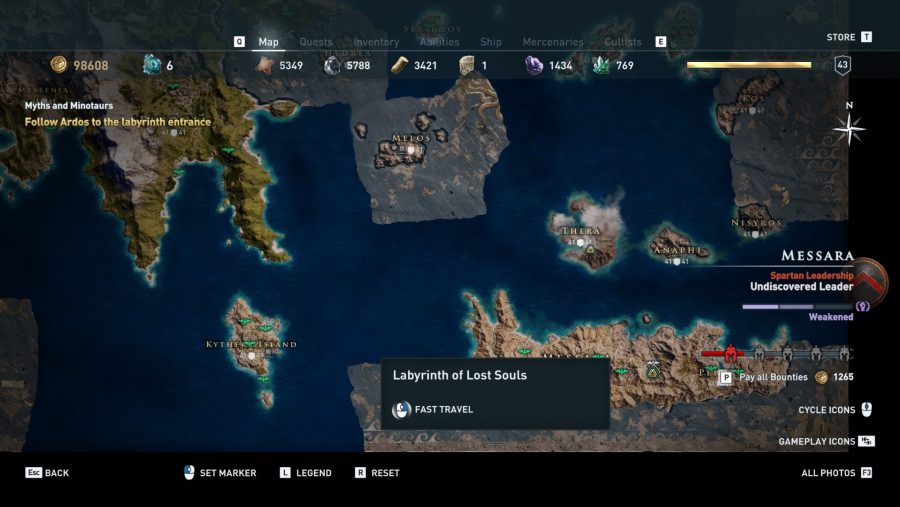 With these three quests done, you’ll be able to progress onto the He Waits quest. Head back to the Labyrinth of Lost Souls, and follow Ardos inside. Insert the key into the lock and then dive down into the labyrinth. Inside, you’ll be able to see the the glowing gold thread that Theseus used to navigate the maze in the original Greek myth. Following this will lead you in the right direction. The thread eventually runs out, but it’s not difficult to find your way to the centre of the labyrinth from that point.

At the centre you’ll find the Minotaur. It’s large and strong, but this battle is nowhere near as difficult as it first appears to be. Keep your distance from its heavy swings and ground pound attack, and approach from the rear to unleash your most damaging skills. When you reduce its health to 50% you’ll find that the arena is reduced to a smaller size, but the Minotaur continues to use the same easy-to-dodge attack patterns, so you shouldn’t be in any more trouble.

After defeating the Minotaur and looting its body you’ll conclude the quest and be rewarded with a Minotaur Figurehead for your ship, the heavy Minotaur’s Labrys axe, and the all-important Prize of the Minotaur. Return to Atlantis with the Prize of the Minotaur to unlock one of the four gate seals, get a snippet of First Civilization lore, and complete one stage of The Gates of Atlantis quest.