How do you find and beat the Sphinx in Assassin’s Creed Odyssey? This mythical beast is one of four creatures in the game, and must be defeated in order to access the finale of one of Odyssey’s major questlines.

After discovering Atlantis, you will unlock a new quest line: The Gates of Atlantis. To operate the gate, you will need to gather four different artifacts. Each artifact is in the possession of a mythical beast. In this instance, we’ll be retrieving the artifact from Boeotia, which is held by the Sphinx.

Head to Boeotia and seek out Gorgias to start the Lore of the Sphinx quest. He is in the southern part of Lake Kopais, very close the the border. His location is easy to spot as the ruins are made of strange, angular rock, akin to the stones that make up the Ancient Forge where you upgrade the Spear of Leonidas. Talk to Gorgias to unlock the next stage of the quest: find the apprentice and get the amulet.

The apprentice can be found in the northeastern part of the Scorched Rolling Plains, near the Tomb of Menoikeus. It’s not too far from the strange ruins. Retrieve the amulet and you’ll be able to progress onto the Awaken the Myth quest. 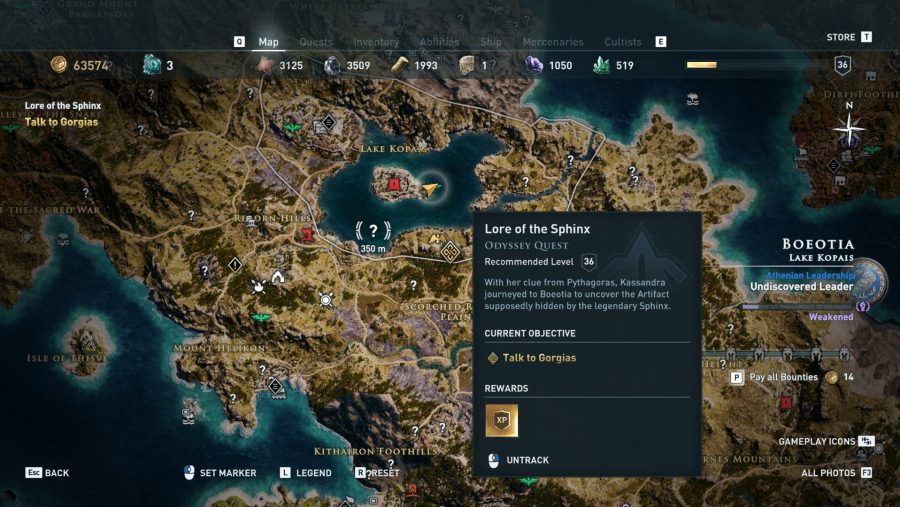 Return to the strange ruins and place the amulet in the altar. This will summon the Sphinx. While she looks ferocious, you won’t actually have to fight her. Instead, you must defeat her in a battle of wits. She will pose you three riddles, and you must select the correct answer from three options.

Many of the riddles are easy to work out, but should you be struggling, you can find the answers to all 12 of the Sphinx’s potential riddles below.

You must answer all three correctly, and also remember all three of your answers. Answer incorrectly and you will be killed and must start the sequence again.

After completing the conversation, glyphs will light up on the surrounding stones. You must activate the glyphs that represent each of your three answers. Then return to the Sphinx to claim the First Civilization artifact. Along with the Prize of the Sphinx, you’ll also receive a Sphinx Figurehead for your ship, and a Mace of the Sphinx weapon.

With the Prize of the Sphinx in hand, you can return to Atlantis and slot the artifact into the far left corner pillar. This will unlock some new First Civilization lore, and complete one stage of The Gates of Atlantis quest.