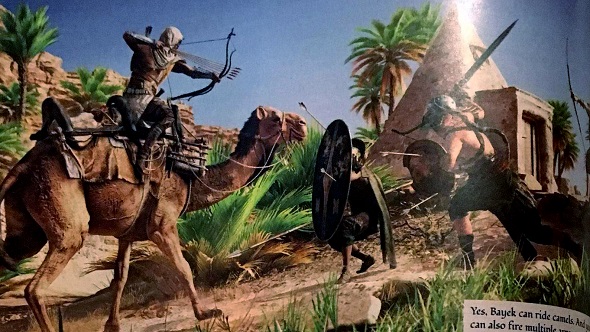 Assassin’s Creed: Origins was finally, officially revealed at Microsoft’s E3 2017 press conference, showing off a li’l gameplay for Ubisoft’s return to alt-historical stabbings. See it above.

Among the elements teased in the trailer are naval segments, pyramid parkour, dangerous sandstorms, fantasy creatures, and coliseum fights.

You’ll play Ba Yek, an Egyption sheriff, fighting the dark forces in a refreshed Assassin’s Creed. Perhaps most exciting, he’s got a hawk to use for scouting to make up for the lack of modern technology in an Assassin’s Creed set so far back in history.

A key difference from this to older Assassin’s Creed titles is a whole host of RPG elements, such as levelling up and a loot system. How exactly it all works hasn’t been shown off yet, but upgrading Ba Yek’s skills seems likely, given how they showed off using his hawk as a tool for scouting.

There’s also the ability to curve your arrows after firing, Wanted-style, plus a fair amount of slow-motion bow firing, because even in ancient Egypt there was Matrix-style action.