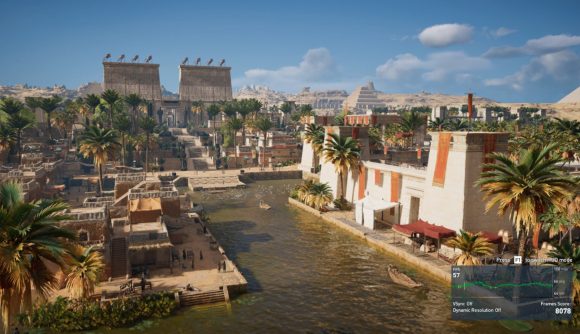 Assassin’s Creed Valhalla will be upon us before we know it, but if you haven’t had the chance to play the latest ‘generation’ of Assassin’s Creed games, now’s the perfect opportunity. Assassin’s Creed Origins will be free to play on PC this weekend, and you can pre-load it now so you’re ready to go.

The free weekend for Assassin’s Creed Origins begins June 19 and runs to June 21, and it gives you access to the entire gameworld. Origins tells what may be the founding story of the Brotherhood of Assassins, and that begins with Bayek, a Medjay from a small village in Egypt, whose life is turned into a quest for vengeance.

Assassin’s Creed Origins was a major departure from some of the norms established by the long-running franchise. There’s more of a focus on loot and combat, which itself is much more a focus in Origins than it was in previous entries. Rather than relying primarily on stealthy approaches, Bayek holds his own in fights, so you can take guards and soldiers head on in many cases. Watch out, however, for hippopotamuses.

Ubisoft has a helpful guide to the real-world history that underpins all the Assassin’s Creed games, and in every case there’s a healthy blend of fantasy and myth woven in with the historical record. In Origins, however, you have the opportunity to visit some spectacular recreations of how Egypt probably looked during the Ptolemaic period.

To pre-load the game, you’ll want to download and open Uplay, then navigate to its store page from the launcher. You’ll be able to start the install process there.