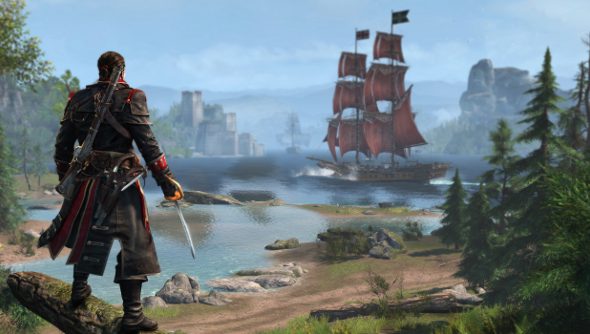 If you were, like me, a bit disappointed that Assassin’s Creed went back to its traditional landlocked exploration in Assassin’s Creed Unity after the marvelous Black Flag, then you might have reason to tap another keg of rum today.

Ubisoft has announced the imminent release of Assassin’s Creed: Rogue on PC, which launched on last gen consoles last year.

Rogue follows the exploits of Assassin turned Templar, Shay Patrick Cormac, as he explores the North Atlantic. It’s set further north and a good few years after Black Flag, but otherwise the two are very much alike. You’ll be able to get your grubby hands on it come March 10th.

Despite being a third-person game, Rogue also employs eye tracking, so you can move the camera as you look left or right. You’ll need the SteelSeries Sentry if you want to do that, though.

If you pre-order the game on Uplay, you’ll also be able to pick up one of seven Assassin’s Creed games for free, which is a rather nice bonus if you’ve missed any of them.

Ubisoft has also released the minimum system requirements, which you can take a look at below.