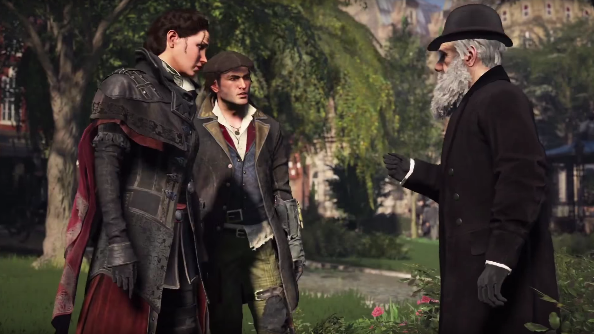 Update: The Darwin and Dickens Conspiracy is a pre-order bonus, so you’ll need to drop cash early if you want to meet these chappies.

Every Assassin’s Creed game manages to shoehorn some famous people from history into its world, and for Syndicate Ubisoft have cherry picked two of the world’s greatest Charlies: Dickens and Darwin. One’s arguably the most famous novelist that ever lived, while the other worked tirelessly on the theory of evolution.

And, as I’m sure Assassin’s Creed is going to insist, both were also caught up in the massive Assassins/Templar conspiracy. Because of course they were.

The likes of Da Vinci and George Washington in previous Assassin’s Creed games felt somewhat credible, but as wonderful as these two men are they do feel a little forced. But forget that; look at those beards! Assassin’s Creed has always been wonderful at faces, and these are some mighty fine mugs indeed.