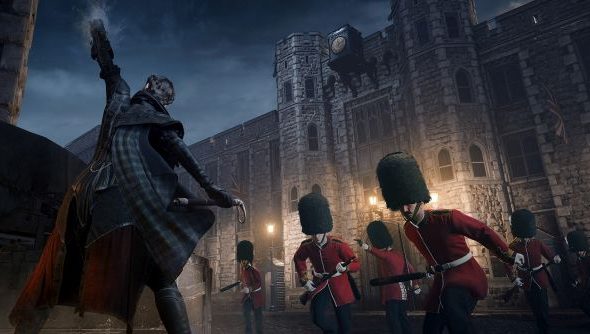 Ah, is there any more predictable gaming phenomenon than the Ubisoft PC port delay? Despite the latest generation of consoles being as close to custom-designed PCs as they’ve ever been, we’re still going to be waiting a few weeks extra for Assassin’s Creed Syndicate to hit our Steam shores. Sam Kovalev (who works at Ubisoft Kiev, where I assume the PC port is being developed) explains the reasoning behind the delay to November 19th.

As usualy, it boils down to wanting more time to hammer out bugs on the wide variety of systems that will want to run the game.

“The additional four weeks are for us to really bear down and finalize all of the polish and optimization, to make sure the game and all of its systems are stable when it launches, so it runs smoothly for all players starting on day one.”

The post goes on to say that Syndicate is aiming to run at 1080p (hooray) and 30 FPS (well, it’ll do). There will be no locks in place, however, so doubtless both will be pushed far beyond that by particularly powerful PCs and a dedicated ini-editting community. It’s also mentioned that, while there has been a delay, they’ve increased the efficiency of their productioin pipeline to ensure ports happen as fast as possible. Probably not the best place to announce that, but it may mean less of this in the future – or, at least, that it won’t scale upwards along with the complexity of the games themselves in coming years.