Rather than just giving you loads of money that you really don’t have any use for, chests in Assassin’s Creed Syndicate will also contain crafting materials that you can use to create special equipment. You can also gain materials from completing missions.

When I think of crafting resources I imagine a pile of random junk: metal scraps, cogs, tubing and gaffer tape. Apparently not, as you’ll also be able to use these resources to get discounts on items, bribe the police, sabotage the Templar’s carriages and weapons, and make your Rooks stronger.

I like to imagine one of the twins just walking up to a member of their gang and strapping a load of junk to them. “You’re stronger now,” they’d say, as they accidentally ran up the wrong wall and jumped in the opposite direction.

Some rare materials likeFire Opal or Golden Spider Silk will only be found under special circumstances, like completing the right side mission. These will likely be for the fancy decorative armour pieces you can craft for that subtle, stealthy look. You’ll be able to customise your assassin much more in this one, it seems. 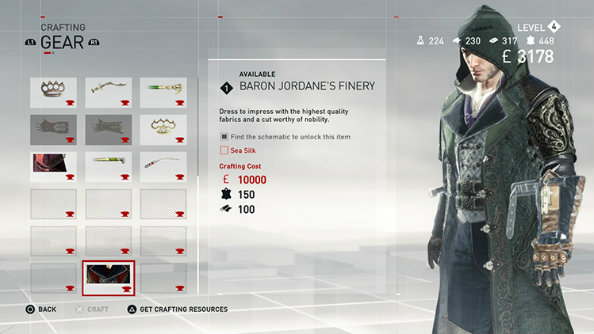 “In Assassin’s Creed Syndicate, you will be able to select your weapons (cane sword, brass knuckles and kukri blade), your Assassin Gauntlet, your outfits, and the color of your gear,” says the UbiBlog post. “On top of those options, Jacob will be able to choose from a variety of belts that will give him defense and stealth bonuses, while Evie has a selection of capes.”

One of those capes is a frilly white number with a massive Assassins’ logo embroidered into it. It gives +5 Defense and +5 Stealth. Yeah, +5 Stealth for a thing with your secret murder society logo on it.

There will also be skill trees that are broken into three categories: Stealth, Combat and Ecosystem. “Stealth and Combat skills include combo boosts, Lockpicking and health upgrades. Ecosystem skills will revolve around the world and affect things like Eagle Vision, carriages and your Rooks.”

The twin protagonists will have different skills that will hopefully set them apart, too. You know, outside of the frilly stealth capes.