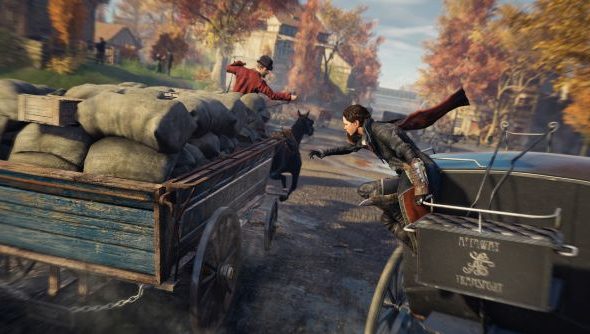 A patch for Assassin’s Creed: Syndicate will be released on PC tomorrow, having gone live for consoles today. It’s titled 1.21 and features a host of bug fixes, AI improvements, UI tweaks and stability boosts. It also touches on issues in the Fight Club. I don’t think Chuck Palahniuk ever specifically mentioned patching as something to watch out for, but I feel like it goes against the tenents of the organisation anyway.

Thinking of picking up Syndicate for PC? Here’s our port review of the latest Assassin’s Creed.

You can read the full notes on the official forums, but here’s the stuff specifically for PC and some highlights from elsewhere:

It will go live at some point tomorrow and shouldn’t tax your internet too much at a download size of around 500 megs. If you were hoping to pick up Syndicate cheap once it had a couple of patches in it, even the Thanksgiving sale isn’t enough to coax a percentage discount out of Ubisoft this close to release, at least on Steam. However, the better-anyway Black Flag is less than the cost of a decent takeout.