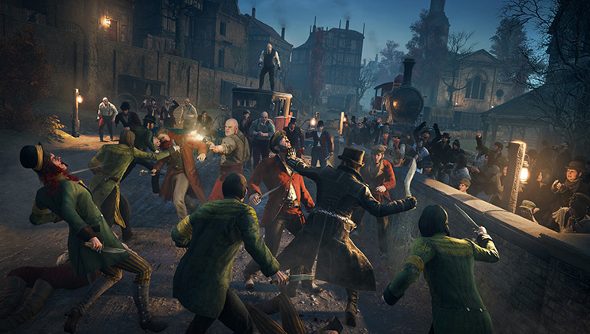 While our console cousins leap across rooftops, muck around on trains and murder countless Templars, we are still waiting for the PC version of Assassin’s Creed Syndicate, and we’ll have to keep waiting until November 19th.

While you wait, why not see if your rig will be able to run it, because Ubisoft have just posted the minimum and recommended system requirements. And they’re lower than Unity’s.

Yes, the minimum requirements for Assassin’s Creed Syndicate are actually lower than its year-old predecessor, Unity. The recommended requirements are mostly the same, though Syndicate recommends a 4GB GPU rather than a 3GB one.

Here’s what you’ll need to run the game:

And here’s the recommended requirements:

And, for the sake of comparison, here are the crazy system requirements for Assassin’s Creed Unity.

It’s also worth noting that, while Syndicate recommends a 4GB GPU instead of the 3GB GPU for Unity, 3GBs should still be fine.

“For a recommended experience, the game requires a video card with at least 3GB of VRAM when playing at a full HD resolution, “ say Ubisoft. “While we encourage you to fiddle with the advanced options to fully customize your gaming experience, please keep an eye out for the VRAM meter usage when you adjust these settings.”

On PC, Syndicate will also have exclusive Nvidia features like TXAA, HBAO+, G-Sync support and fancy shadows. You’ll be able to customise the controls for your mouse and keyboard as well.

Given how steep, and often inflated, the requirements are for modern triple-A games, it’s a significant surprise to see a reduction. Experience suggests that these requirements should be taken with a pinch of salt, however.