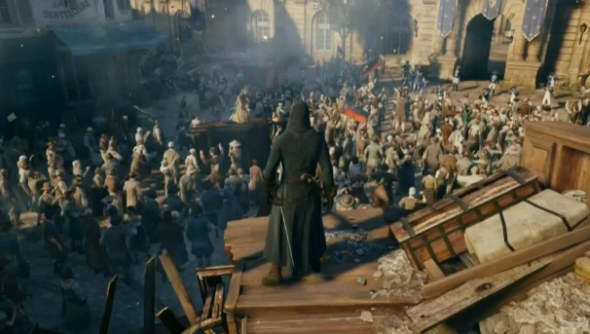 Assassin’s Creed Unity launched with a host of bugs. Two patches have already been released and a third is currently in development. One of Ubisoft’s technical teams are racing to get framerate fixes into the next patch, providing players with a more consistent experience while playing.

Ubisoft have detailed the areas they think are causing the problem for players and thankfully they won’t be touching the size of crowds.

“Crowd size was something we looked at extensively pre-launch, it is something we continue to keep a close eye on,” Ubisoft write. “We have just finished a new round of tests on crowd size but have found it is not linked to this problem and does not improve frame rate, so we will be leaving crowds as they are.”

(And there was much rejoicing.)

Areas Ubisoft have found that effect framerate are the navigation system for climbing, unoptimised multi-core processors, and when the camera flies up high and shows lots of the city.

Strangely, Ubisoft reveal that they have “detected a distinct discrepancy between what we observed in the pre-launch versus post-launch environment.” This is particularly strange as they aren’t speaking about PCs exclusively. Considering all consoles are created equal they should behave exactly the same in internal testing and external use.

The team are working to “see these changes rolled out in Patch 3” but they won’t confirm it.