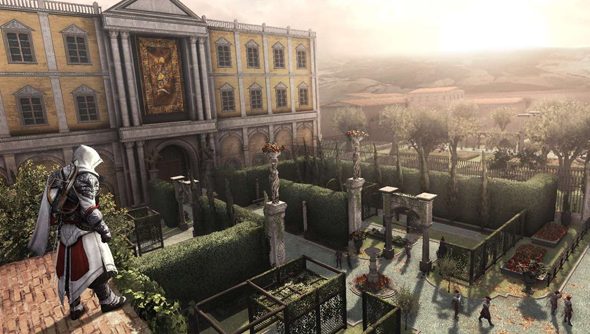 In some ways, Assassin’s Creed is prime MMO material that wouldn’t be tarnished in translation: it’s already about bunny-hopping through a world filled with visible artifacts, that flicks on and offline without warning.

Vincent Pontbriand made the same point last week without any mean jokes at the MMO genre’s expense. The Assassin’s Creed Unity producer said he’d “love” to build a massively-multiplayer entry in the stealth-parkour series.

Pontbriand said an MMO would be the perfect excuse to revisit the several cities and storylines Ubisoft have introduced to the Assassin’s Creed universe in the last decade.

“I’d love to have time personally, but it’s not there,” he told ArabicGamers. “My dream would be to build basically an MMO where we can just revisit all these storylines through the same avatar, that would be awesome. But it’s not the game we’re making.”

Pontbriand pointed out that Assassin’s Creed Unity’s four-player co-op was the “first step” toward an online version of the game.

“We haven’t gone as far as we want, you cannot share the world with other groups of people,” he said. “When you’re online with three other friends you’re just the four of you in your session of Paris.