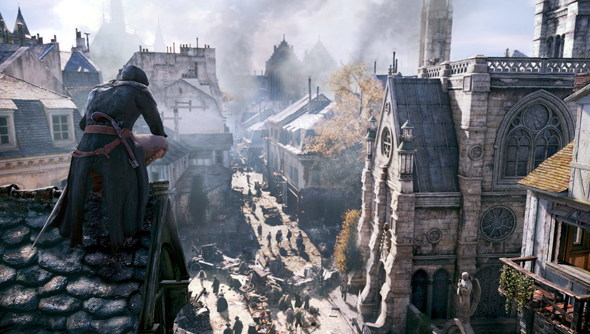 Assassin’s Creed Unity is released this evening. After months of waiting you’ll finally be able to indulge in your fantasy of running over rooftops in revolutionary Paris stabbing people through the neck.

But we’re not going to have a review ready for at least a couple of days.

We knew code for the game was going to be late. The PC version of the game was meant to be with us yesterday. That’s nowhere near enough time for us to give a full review, but we at least hoped to get a performance and port review done for this evening. Unfortunately, our copy still hasn’t arrived.

Fraser’s downloading and playing the game now, given that it’s out in the US, and he’ll post what he can over the next day or two.

Console reviews should be hitting about now – so if you’re interested in how the game’s shaping up outside of the PC, we suggest reading the rest of the internet.

We’re sorry for the pain, but we understand most PC sites are having similar issues. If you’re on the fence about buying Unity, we’d recommend waiting until a better picture emerges of how it plays and runs.